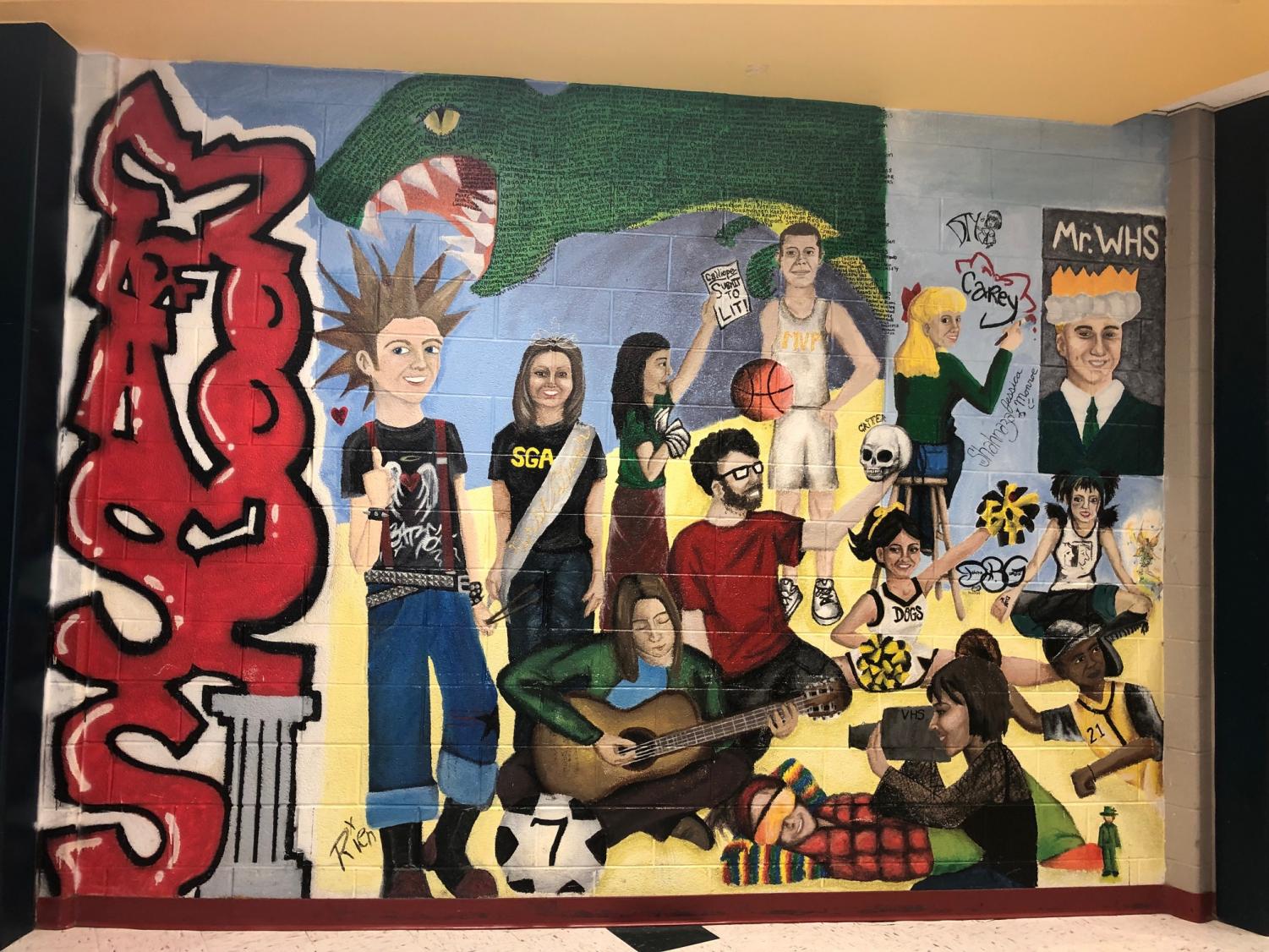 The Mural of the Class of 2002, facing the main office of the building. (Photo courtesy of Dipa Bhattacharyya)

The Mural of the Class of 2002, facing the main office of the building.

THE PIONEERS OF WESTFIELD: CLASS OF 2002

The mural representing the class of 2002 is considerably controversial. In fact, according to teachers in the art department, the mural has even raised questions such as, “When are we painting over that one?”

The mural highlights a small group of people who were apparently prominent in Westfield’s early days. Located near the main office at the entrance of the school, it includes images of Mr. Westfield, a renowned event that year, as well as the first prom queen and several athletes representing the sports that Westfield is now famed for. Towering over all of them is a giant dinosaur, which according to Carey Dueweke, one of the creators of the mural, was an unplanned component that later ended up being one of its defining features.

Mural designs have always been subject to administrative approval, but the rogue dinosaur somehow slipped in unnoticed.

Dueweke, quoted in the yearbook from that year, recalled, “One afternoon I came down to paint and there was a giant dinosaur. I internally panicked. As if he could smell fear, the principal showed up and asked me why there was an unapproved dinosaur.”

Dueweke recalled replying, “We’re the first class to exist in this school and we stormed the Halls… And I’m going to write the name of every graduate on the dinosaur because we’re the dinosaur.”

Steve Klix, math teacher, who has worked at Westfield since day one, elaborated on concerns over the mural’s narrow spotlight: “[The focus seems] much more personal because these are all specific students.”

However, many teachers, including Klix, agree that this focus on a few individuals was not intentional, and definitely not bothersome. In fact, they believe that it actually distinguishes the first graduating class and does an excellent job in presenting all sides of our diverse school.

Perhaps this was said best by Gregg Greentree, English teacher, who also joined the Westfield community in 2000: “It’s not like everyone on there looks the same. You have boys and girls, people of color, popular kids and athletes and artsy kids. It works for me.”

The 2001-2002 schoolyear also brought the worst terrorist attack in American history—one that took the lives of nearly 3,000 Americans. Several staff members who were present on September 11 still have vivid memories of that day.

“We were in 4th period,” Christy Jenkins, a veteran math teacher, reminisced. “[In]the math department, we used to play practical jokes on each other. So, one of the other teachers came in during class while I was teaching and just sat down on my desk, and I asked her, ‘What do you want?’ She just said, ‘I just don’t want to be alone right now.’ I thought it was just another practical joke. Later, Mr. Rumberger [Dale Rumberger, Westfield principal from 2000-2004], came on the announcements and said something about a plane hitting the World Trade Center in New York and that there was a threat in the DC area, and a plane had also hit the Pentagon. I remember three students got up. Their parents worked at the Pentagon.”

Despite all the tragedies that came with that devastating day, Westfield participated in a number of uplifting events that would come to define Bulldog culture. One of those was the first Mr. Westfield, a renowned pageant that celebrated the men of Westfield. The drama department also performed “The Glass Menagerie” on November 16 during this year, a play which not only set up a strong basis for the following twenty years of the Westfield Drama Department, but also sparked a myriad of positive reviews by the prestigious Cappies Organization. Additionally, this was the year of the first graduating class, and consequently, their first prom. Astonishingly, the class of 2002 had only 318 graduates.

“We had a very small graduating class. I remember, graduation was in the gymnasium,” recalled Steven Lombard, Math Teacher. Everything was smaller in those early days. Westfield’s student and faculty populations, like its fame, would blossom in years to come. The very the next year, in fact, the Varsity football team would win their first state championship.

“One of the best things from that year was that you could actually walk down the hallways,” Lombard added.