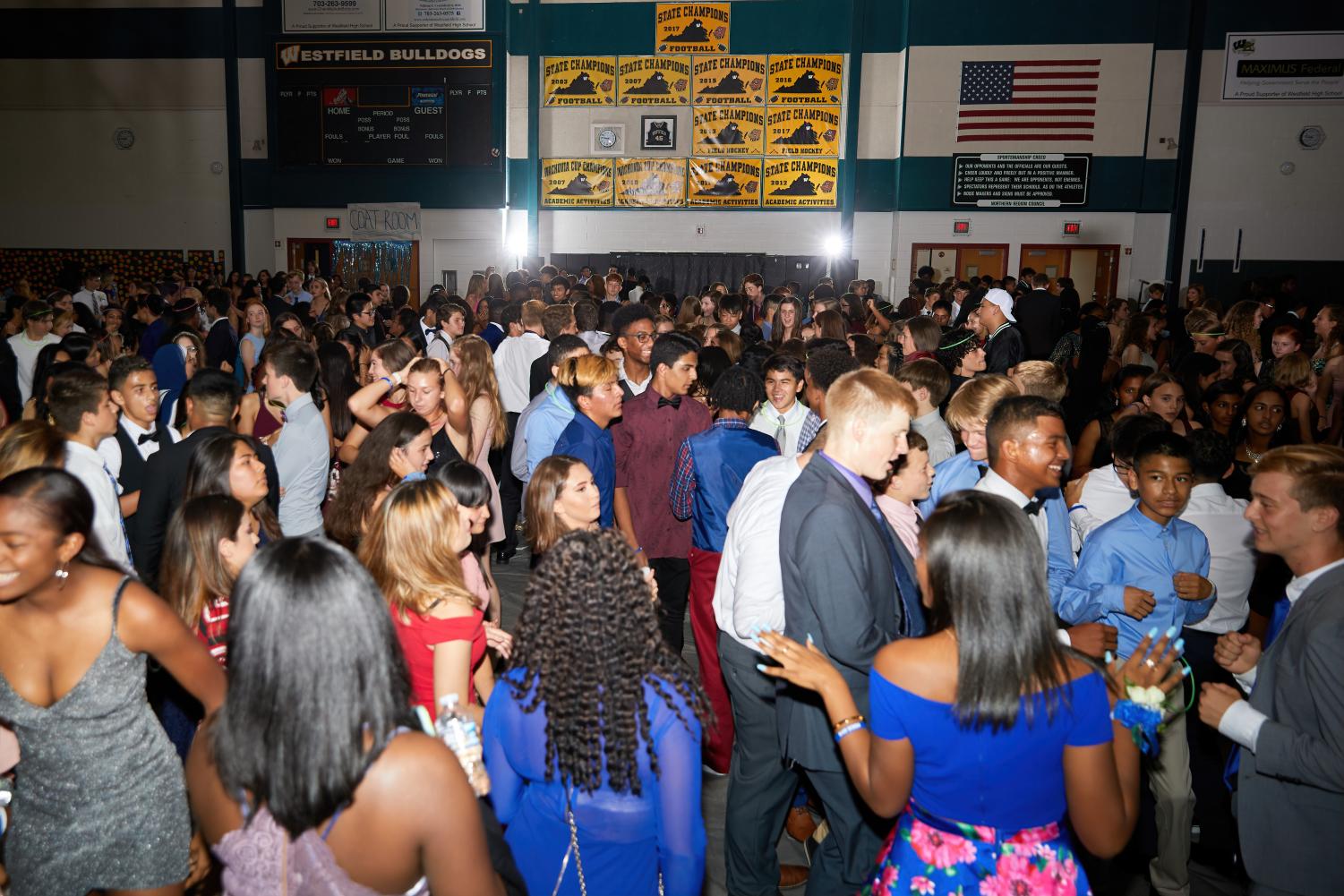 Students dancing in the packed gym for Homecoming. (Photo courtesy of Fred Ingham)

Students dancing in the packed gym for Homecoming.

The game started with a bang: an early fumble, an early touchdown. Westfield’s football team looked like it was going to dominate. But Lake Braddock would not go down without a fight. While Westfield was victorious, the game was close, ending 40-34, with exciting final moments, including several last minute touchdowns.

The dance, while not as popular as last year’s, still had great turnout, with over 850 tickets sold. The new spirit court received mixed reviews, though the Student Government Association (SGA) plans to continue it for next year. The homecoming parade was also a rousing success, with more clubs attending than ever before.

Homecoming weekend started Friday, September 20, with a pep rally for the upcoming weekend. The rally created hype, with events such as the football players’ mock-dance, the lively dance team’s performance, and relay races getting everybody excited for the game.

Ryan Chapman, SGA coordinator, noted that the “participation from teachers was great,” and that they all “loved the energy at the pep rally.”

Later that day at the Homecoming Parade, the energy and excitement were palpable, with the streets  around Stone Middle School packed with onlookers on both sides. Highlights included a motorcycle gang sporting Westfield colors roaring by, along with decorative floats, most notably the Robotics team float of a Doctor Who character, the robotic dog K9.

When asked about what challenges arose during the parade, Chapman said, “We had more vehicles for clubs than we had planned.”

The increased number of floats is something they will consider for next year.

The hype persisted through the parade all the way to the Homecoming football game. Fans seemed riveted, given the great start for Westfield. Lake Braddock fumbled the ball, leading to a turnover. This later led to a touchdown by Avery Howard, 12, making the score 7-0. Lake Braddock soon made a touchdown as well, leading to the first tie of the night, 7-7.

Lake Braddock later scored again, but Westfield’s Alex Richards, 11, came back and tied it. This then happened a third time, with Howard once again scoring the touchdown. The crowd was on the edge of their seat, with Westfield’s Dog Pound cheering excitedly the entire time.

Mathias Zumot, 12, Dog Pound leader, stated that it was a “good start to the season,” and was glad to see everyone excited for the homecoming game.

Alan Gutierrez, 12, when asked about why he had come, declared he was “here for the cheering” and would “pray for the team.”

Turnout for the game was not simply limited to seniors, however. Freshman turned out in droves as well, happily cheering for Westfield as if they had been fans for years.

Sidikie Bayoh, 9, stated emphatically that “this is [our] school,” and that “we have to represent” it.

Halftime was a flurry of events as well. The dance team put on a stunning performance, encouraging fans to cheer more for Westfield. A bombastic production by the band also roused the crowd. The announcement of the Spirit Court winners occurred shortly after.

Spirit Court is SGA’s way to avert the usual popularity contest of a traditional homecoming King and Queen. Spirit Court, in a nutshell, is based around participation in Spirit Week, where students dress in certain ways to demonstrate support for Westfield. Eight standout enthusiasts, elected by student votes, were announced at the football game, and from them a winner who stood out most was declared.

Daryl Freeburn, 11, one of the Spirit Court winners, when asked about his experience, said it “felt pretty good” to win, but felt it was “still a popularity contest” as “students are [going to] vote for who they think is better, rather than actual spirit.”

Chapman disagreed, conceding that it was “less of a popularity contest,” but there was still a “diverse cast of winners,” and that “no one seems to want to go back.”

After halftime, the game’s direction turned sharp during the third quarter. Westfield came in swinging, scoring three touchdowns in a row. Noah Kim, 12, made the first, with Mikal Legall, 10, earning the last two touchdowns, making the score 40-21, in Westfield’s favor. Most assumed at this point it was a wash, with no way Lake Braddock could come back from such a poor position.

But Lake Braddock nearly pulled through, scoring two late game touchdowns, eking out a 40-34 score. Lake Braddock played well, and taught a valuable lesson to our football team – the game ain’t over. Fortunately, Lake Braddock’s second wind was not enough. The Homecoming game ended with a Westfield victory.

For many homecoming revelers, the next 24 hours seemed to fly by. The energy built up on Friday lingered long enough to last until Saturday night: the main highlight, the Homecoming dance.

The dance started unexpectedly slow. The crowd trickled in, leading to what felt like a late start. Lower overall turnout than last year did not help either. Shorter planning time for Homecoming in general meant it was less extravagant as well. But even with these setbacks, the dance was a success, with many students saying it was a great experience and a fun time overall.

SGA elaborated on what it takes to plan and execute a Homecoming. Chapman, Emily Tsantes, SGA coordinator; SGA representatives Ayonnah Tinsley, 11; Teresa Morin, 10; and Robert Black, 12, were present to discuss.

The change from the traditional Homecoming King and Queens to the Spirit Court was touted often in promotion for the dance.

When asked about why the change was made, Tinsley stated that it was to “increase involvement and participation,” and to reduce the “popularity contest” aspect of the traditional court.

Chapman, again praised the change as a success; however, some flaws such as the announcement being rushed during halftime and no mention of Spirit Court at the dance are known, and SGA will work to improve the Spirit Court for next year.

Students may not know this, but Homecoming planning this year was tight. Not only did the school year start early, cutting into the summer, the actual date of the dance was moved up as well, making time for planning short.

Morin went into detail, describing that “[SGA] had to come in early on Saturday and stay after school,” all to make sure they could have time to properly plan the parade and dance.

Tsantes also chipped in, saying that “planning for Homecoming started last year,” with work being done “over the spring and summer.”

Attendance rates of Homecoming are also a concern. Chapman says that SGA does keep track of attendance for the dance. He revealed that last year, they sold 900 tickets for the Homecoming dance, but this year they sold 850. A lower rate than last year, but still good turnout overall: with Westfield having 2500 students, the last two years have had approximately a 33% student turnout, which is nothing to scoff at.

Increasing attendance rate is still a challenge, so when asked about what they planned to do to get more to attend, Tinsley stated that “advertising, social media, flyers and announcements are great at getting the word out about the dance.”

Black added that “cheaper ticket prices also help,” with the reduced cost the earlier you buy system being an example of that in action.

Chapman finished with what they plan to do for future Homecomings: “Expect more vehicles for the parade, keep the dance [simple] due to time constraints, and improve Spirit Court.”