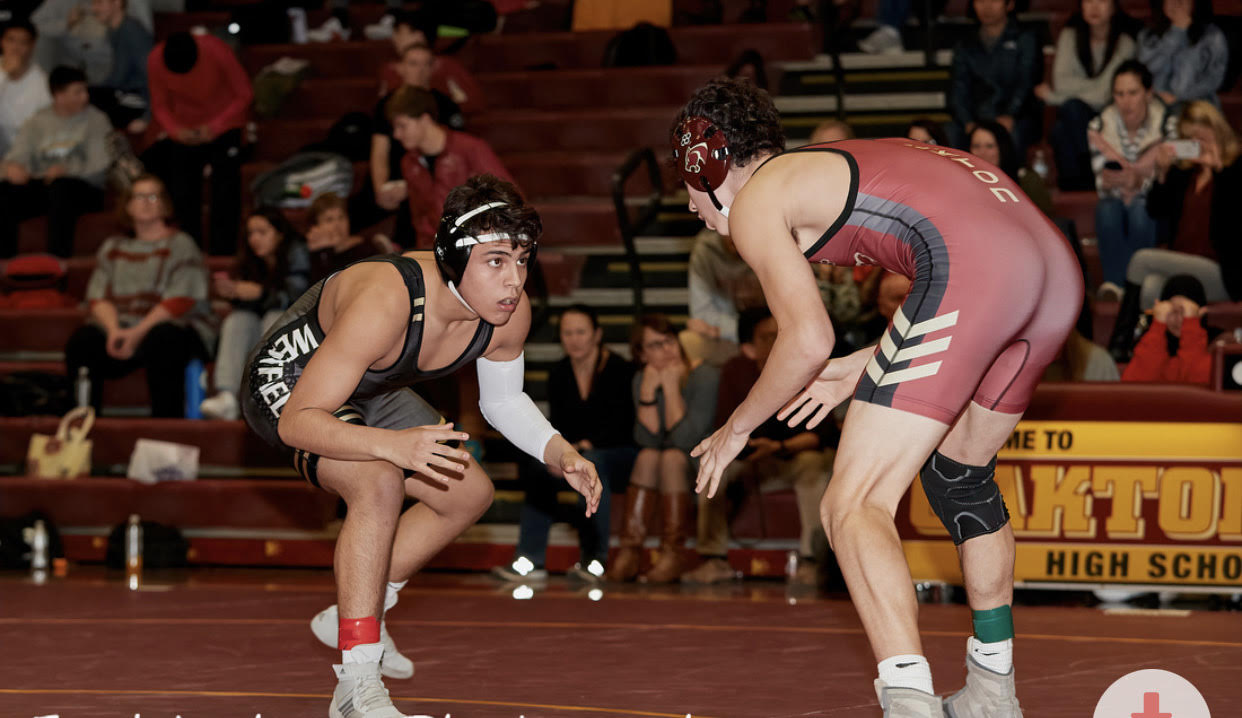 Faced with his opponent, Alcocer is determined to win and make everyone proud. (Photo courtesy of Marcelo Alcocer )

Faced with his opponent, Alcocer is determined to win and make everyone proud.

ATHLETE OF THE ISSUE: MARCELO ALCOCER

As he steps onto the mat to face his opponent, Marcelo Alcocer, 12, reflects on what motivates him. His biggest  motivator is the thought of making people proud: his coaches, parents, teammates, and–most importantly, he says–himself.

Alcocer is  a varsity wrestler weighing 138 pounds. He began wrestling for Westfield four years ago and has been in the sport ever since. Alcocer is a committed player, having started freshman year and now ending his senior year still playing. But what was the reason he even tried out for the team?

“I started Wrestling because it was a tough sport and I wanted to challenge myself to really see if I can do it, or even become good at it,” explained Alcocer.

Wrestling is a tough sport, and he claims losing sucks; therefore, winning is what pushes him forward to succeed during his tough matches.

Another factor to Alcocers success as a wrestler consists of his inspirations. “My coaches inspire me, because they have done this sport in the past and they know what it takes to win and become great. They put a lot of hours and work into helping me improve, and to me if I can make them proud, then well, I’m happy.”

“Marcelo is the definition of a student athlete.  He does a fantastic job in the classroom and leads by example on the mats. A true leader in every way!” exclaimed Varsity wrestling coach, Kieth Sholdrers.

Despite his achievements, Alcocer has faced various obstacles during his season. Wrestling is an obstacle in itself because according to Alcocer, you first win practice, then you have to cut weight because if you don’t make weight you don’t wrestle. Then you have to win the tournament or match because you were committed to getting the opportunity to wrestle, and if you lose it was basically all for nothing.

Alcocers deals with the obstacles by constantly pushing forward. He explains, “My mentality is, you gotta love it so you want it so bad that you’re pushing yourself to those limits where you simply just hate it.”

Although his passion is for wrestling, he has played jiu jitsu for five years prior. His discovery of wrestling  has been his main focus for the past four years of his life, as he wants to commit and do big things this season. He sees himself wrestling after graduation as well as college. Alcocer has a “good” academic life and hopes to pursue a degree in business economics.

Committing a great amount of time to school and wrestling, how does Alcocer spend his free time? He works at Chick fil a and enjoys hanging out with friends and family. He lives with his mom, dad and sister.

Overall Alcocer just wants to be great. He wants to be better than the average wrestler. He sees himself coaching wrestling in the future as well as hopefully putting a future child into the sport. And although he faces many obstacles and challenges as a wrestler, they are things that “I need to overcome to achieve my goals,” he declares.