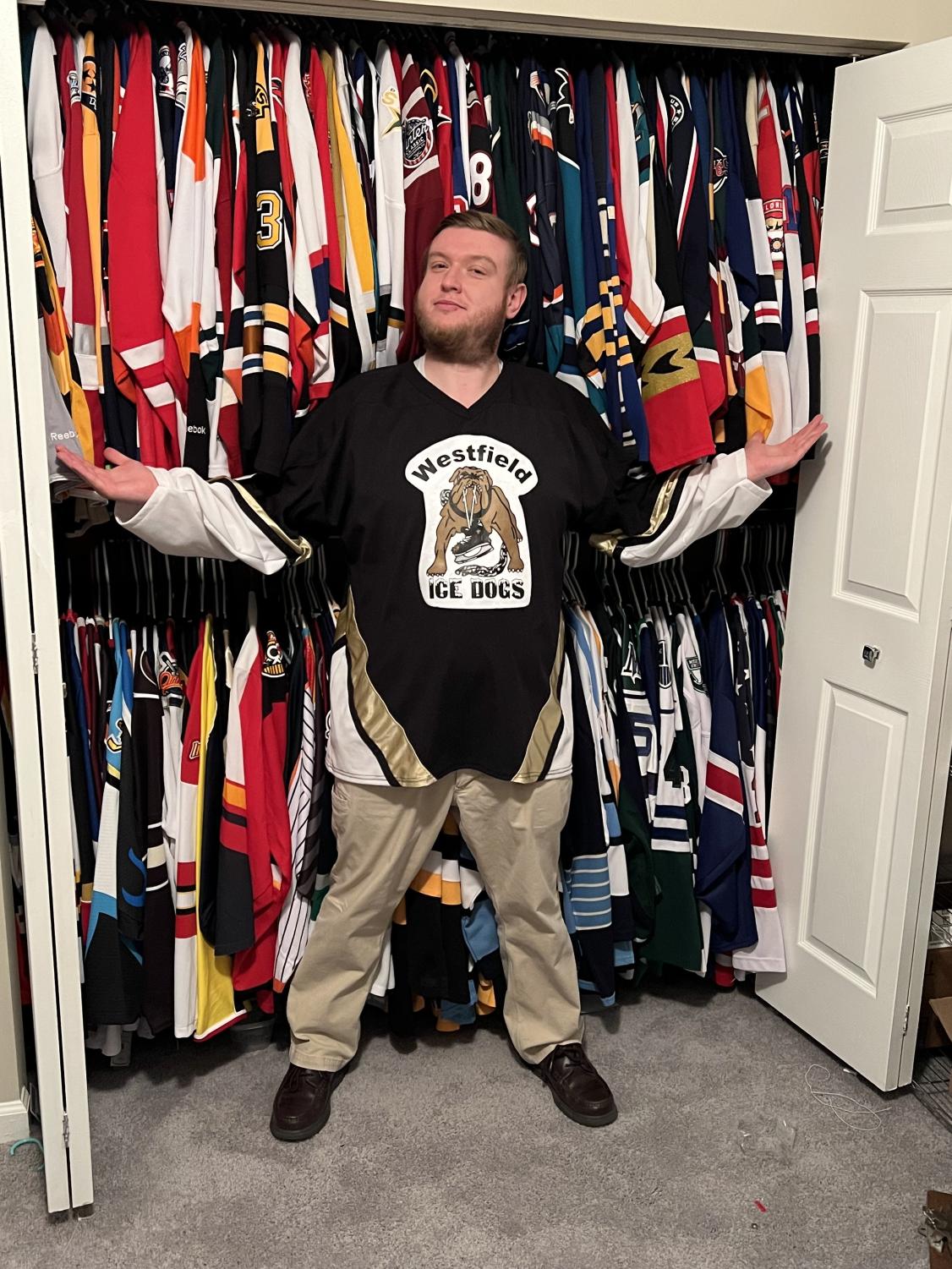 Baranowski with his 371 hockey jerseys. (Photo courtesy of John Baranowski)

Baranowski with his 371 hockey jerseys.

STAFF OF THE ISSUE: JOHN BARANOWSKI

If you are going to C hall, the classroom of John Baranowski is pretty hard to miss. Room F124, which he lovingly describes as a “fishbowl,” has large windows that face out into the hallway, inviting passersby to take a glimpse at one of his impassioned history lectures. His window sills are lined with obscure flags and their placards, and the adjacent wall is adorned with a flag that correlates with the curriculum he’s currently teaching. His personal touches give students an opportunity to learn before they even step into the room.

“I always want to be a bigger part of the Westfield community,” Baranowski proclaimed.

Baranowski grew up in Pittsburgh and became interested in history at a very young age.  “I spent a lot of time with my grandfather who was a bomber pilot in the south pacific in WWII, and listening to his stories inspired me to get into history,” Baranowski explained. History is not his only lifelong passion, though. Mr B. loves Hockey. During his time studying history and museum studies at Mercyhurst University, he started broadcasting and commentating for the Mercyhurst Lakers, the university Hockey team. Baranowski was very involved with the team, even helping with logo redesigns. His time broadcasting honed his public speaking skills, which helped him in his future endeavors.

After his time at Mercyhurst, Baranowski went to the University of Pittsburgh for a Masters in teaching. During this period, Baranowski worked as a museum presenter on the USS Requin, a World War II military submarine docked at the Carnegie Science Center, only a few short miles from his college. This gave Baranowski an opportunity to perfect his teaching skills, which would eventually become of great use to him at Westfield.

While Baranowski was working on his teaching degree, he also became a substitute teacher in Fairfax County, including briefly teaching Algebra 2 here at Westfield. “[Substitute Teaching] helped me get my foot in the door,” Baranowski reflected.

After graduating from the University of Pittsburgh, and getting himself acquainted with the classroom through student teaching and subbing, Baranowski was finally employed as a full-time teacher at Westfield in 2017.

Baranowski described his approach to teaching as “very old school and very new school.” Baranowski utilizes the basics such as lectures, but equally enjoys branching out and trying new approaches in the classroom. “I have been experimenting with adding board games in my teaching, because board games can invoke a feeling, and if you understand a feeling of what happens in an era, that era comes much more naturally,” Baranowski explained. Board games aren’t the only experiment Baranowski has used in his teaching, though; He has also employed virtual reality, 3-D video, and “Choose Your Own Adventure” assignments to engage his students in the classroom.

Baranowski’s goal in his unique approach to teaching is to give his students “a sense of historical empathy.”   “I want people to understand why people in the past did what they did,” asserted Baranowski. “You do not need to know all the details, you can look them up; you need to teach the feeling and fill in the rest. As long as you know the overarching basics, you can fill in the rest with critical thinking,” he added.

Baranowski clearly brings his passion for history into the classroom, but what you might know him for is his other passion, hockey. Baranowski wears a different hockey jersey to school every day.

“Every day he wears a jersey, and I don’t know if I’ve seen the same one more than twice,” MaryEllen Webb, English teacher commented.“Mr. B currently owns a whopping 371 jerseys, most of which were purchased through eBay at a lower than retail price. This massive collection occupies an entire closet, forcing Baranowski to use a second closet for his other articles of clothing.

Baranowski wore a suit and tie for his first two years at Westfield, but when he realized none of the other teachers seemed to dress as formally as he did, he began wearing his jerseys. “Nobody stopped me,” explained Baranowski, and thus, his calling card was born.

Baranowski intertwines his two greatest passions in a way you would probably never expect. “Every day what I wear is connected to what I’m teaching,” revealed Baranowski.

If their is a lesson on the signing of the Declaration of Independence, for example, you might see him wearing a Philadelphia Flyers jersey. It is just another way Baranowski goes the extra mile for Westfield.

The Westfield community means a lot to Baranowski, and he has no plans to leave it anytime soon. Baranowski had this to say about his future goals at Westfield:

“I always want to be a part of improving things. I want to make a contribution to Westfield. I try to create a memorable experience for each student, and I hope I encourage them to be as much of an individual as I try to be.”