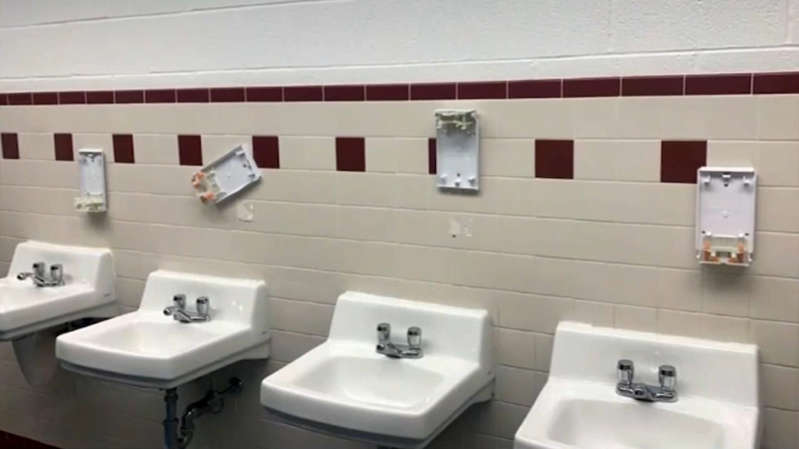 The Ironist presents an argument using that mighty tool known as verbal irony, or sarcasm. Irony has long served as both a weapon and a balm for those living in tough, turbulent times like our own.

By now, everyone has heard about the spectacular Devious Licks hit by some of Westfield’s brave influencers. This convivial trend, originating from Tik Tok, revolves around students harmlessly stealing and destroying objects around their schools and posting videos of the deed on the sacred platform. Some of our bulldog participants were able to honorably steal soap dispensers, bathroom passes, and school supplies such as pencil sharpeners in the name of this trend.

Deborah LeGros, AP Environmental Science and Geosystems teacher, remembers the day she first heard about such devious licks and recalls, “Well, we were walking down to the creek one day and one of my students said, ‘Yo Ms.LeGros, wanna see a crazy lick?’ and he showed me the video of the kid ripping the sink off the wall.”

The most revered lick was hit by two freshmen who magnificently pulled an entire sink and stall door out of the boys bathroom. Needless to say, their consequent fame on Tik Tok was well deserved. In fact, it can even be argued that they deserved much more.

However, it seems the staff and teachers of Westfield are, like always, overreacting. They do not understand that following nationwide trends like this is much more important than a few thousand dollars worth of damage and a potential felony case for the trendsetters. Being funny by destroying school property has clearly been accepted by all the cool kids across the nation – as demonstrated by the emergence of acts regarding this challenge through the states.

In fact, they were able to conduct these acts to such an extent that it successfully gained recognition on CNN. According to CNN, these heros have even smashed bathroom tiles. Due to these courageous acts, bathrooms across the country have been shut down in a beautiful harmony.

Unfortunately, all fame comes with haters. Soon, lame school administrators became worried about students having too much fun and demanded Tik Tok shut it down. The pressure became too much for the platform and it has since removed all videos regarding it.

According to one such teacher, Amanda Blizzard, AP US history teacher, “To me it is selfish behavior. I am struggling to understand how a social media trend can be an acceptable approach to behavior at the high school level. I fail to understand how partaking in this activity which is going to affect your life in such a negative way, is okay. It is heartbreaking.”

We, the Ironists, feel as though actions are not really selfish. Breaking sinks and stealing soap dispensers during a pandemic seems to be very logical. Let us be real, were kids even washing their hands before those items were stolen?

Blizzard’s ruthless desire to unnecessarily destroy the sterling reputations of the courageous Devious Lickers expanded to much more than just the students engaging in the trend. She even came for the ones who were recording.

“Also for the student filming [the Devious Licks], I would question his actions and behaviors as well. We need to address that too,” Blizzard mercilessly adjudicated.

Jason Sachlis, world history teacher, echoed, proving that all history teachers are similarly boring: “My initial reaction was that this was an isolated incident, and then I learned that this was more of a pattern; it became apparent to me how much of a disconnect between what this generation advertises that it stands for and what they really are.”

These teachers’ empathy and genuine concern is extremely irritating – everyone knows that ripping sinks out of bathrooms and putting your future in jeopardy is so much more fun. Yet, it seems this simple fact is unheard of among adults, considering that even all of the administrative team agrees with the teachers. In fact, this team is probably the best at spinning the entire family-friendly trend out of proportion.

In light of the myriad of fabricated information being spread about the integrity of our valiant Devious Lickers, the Watchdog team adopted the initiative of proving their purity. At an exclusive interview with everyone’s favorite Devious Licker, the infamous freshmen Bathroom Door Ripper, we discovered his amiable motives behind pursuing such a charitable cause. Unfortunately, due to the shrewd adults who consistently target such heroes, the Ripper desired to remain anonymous.

When asked how he felt after ripping out the door, the Ripper claimed, “I felt great. I felt like a million bucks, and I am going to do it again for sure.”

Clearly, teachers and administrators need to realize that their ruthless censoring of teenage fun is borderline unethical. It is our right, as students and social media influencers, to participate in Tik Tok trends such as the Devious Licks challenge and express our rebellious and lively nature even if it adversely impacts the rest of our peers. Who cares if boys need to endure long lines to release their needs because there are only limited bathrooms open? The devious lickers surely do not, they feel as though that suppression is an adequate price to pay for a viral video.

When asked what punishment our devious licking heroes who have gloriously shut down the bathrooms are facing, Tony Dabari, Principal of Westfield Highschool, unfairly stated that, “The students whom we were able to identify… are paying restitution meaning they are paying for the parts and labor.”

Unfortunately, they all refuse to understand this simple fact and continue to unreasonably demand us attending school without committing any felonies. What is the point of school if not to destroy it? Some say to receive education, but that is just a seriously radical claim. How offensive! In fact, they have even made outrageous measures to conceal the beautiful mess that the lickers were able to make. Several soap dispensers have been replaced and bathroom passes have been somehow returned to teachers. Even the stolen school supplies have been replaced.