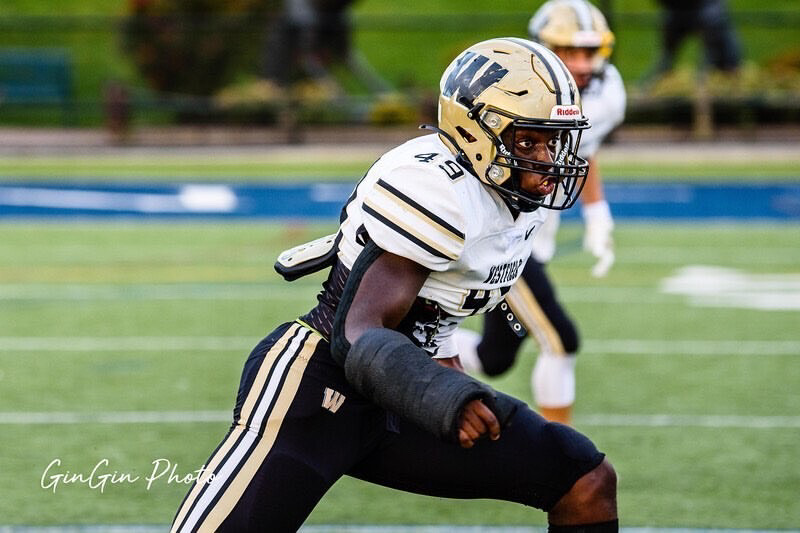 Kouame on the field during a game. (Photo courtesy of JT Yao Kouame)

Kouame on the field during a game.

As he awaits the initial kickoff of a new game, JT Yao Kouame, 12, thinks back to his football journey. As he counts down the seconds, a flashback occurs and he remembers the reason he started all this. With that vision of his mother in his heart and a passion for inspiring his young successors to play every game to their full potential, Westfield’s star linebacker sets off powerfully to a new season.

“I remember playing football with my friends just in the neighborhood during 7th grade – I just wanted to try it out,” Kouame reminisced to the humble beginnings of his football career.

Now a senior, Kouame has realized that football is what he was meant to do. Having played it all throughout high school – in addition to soccer during Freshman year and track, which he started as a Sophomore – he has proven himself to be one of the best on the team and hopes to continue it throughout his college career. In fact, Kyle Simmons, Football coach, immediately referred to Kouame  when asked who he thought should be honored with the title of the Athlete of the Issue.

The motivations behind Kouame ’s astounding athletic performance are accredited to his previous athletic mentors. He acknowledges his gratitude to the older football players who inspired Kouame  during his time as an underclassmen, through their undying work ethic and constant push for excellence.

In Kouame ’s own words, “In 2019 being a younger player and seeing all the older guys being a leader and working hard really pushed me to work hard myself. Especially Ryan Moses, [Class of 2020] – he never doubted himself despite not having the height and worked so hard.”

Additionally, Kouame  referred to his coach when asked about his motivators: “Coach Simmons never lies to me, whenever I do something wrong he would tell me. No matter what he says to me, he would tell me how to fix it. He really helps me be a better person and athlete.”

As he now looks forward to his last year playing high school football, Kouame  assumes the responsibility of inspiring his own younger counterparts in the same way Moses inspired him. In fact, Kouame ’s main objective this season is to be a “leader for the younger guys, make a big impact,  and have a good season to leave [his] number to someone else.”

Despite his consistent achievements on the football field, Kouame  has also encountered obstacles. He is currently injured with an arm dislocation due to an accident on the field. However, like everything else, Kouame  continues to push forward and has discovered some positive factors of this unfortunate situation.

According to him, “Coach told me everything happens for a reason and you just have to push through. Sometimes when things don’t go your way or you encounter adversities, how you overcome that is really important.”

As a result of his accomplished football career, Kouame  has already gotten scholarship offers from several schools. Currently, he is waiting for the end of this season to encounter any others, before he commits to another four amazing years as a football player, this time in college. If he could choose any, Kouame  claims the University of Maryland as being his dream school.

Apart from sports, Kouame ’s favorite class is Personal Fitness, which he looks forward to everyday. Additionally, his hobbies include eating different types of food, working out, hanging out with his friends, and watching his favorite movies Just Mercy and The Joker.

However, the best part of Kouame’s life would probably be his mother, who he considers the reason behind all his successes: “I seriously look up to my mom. I love the way she raised me, my two older brothers, and my sister. She made us responsible and sacrificed a lot for us. I wouldn’t be able to do all this without her.”