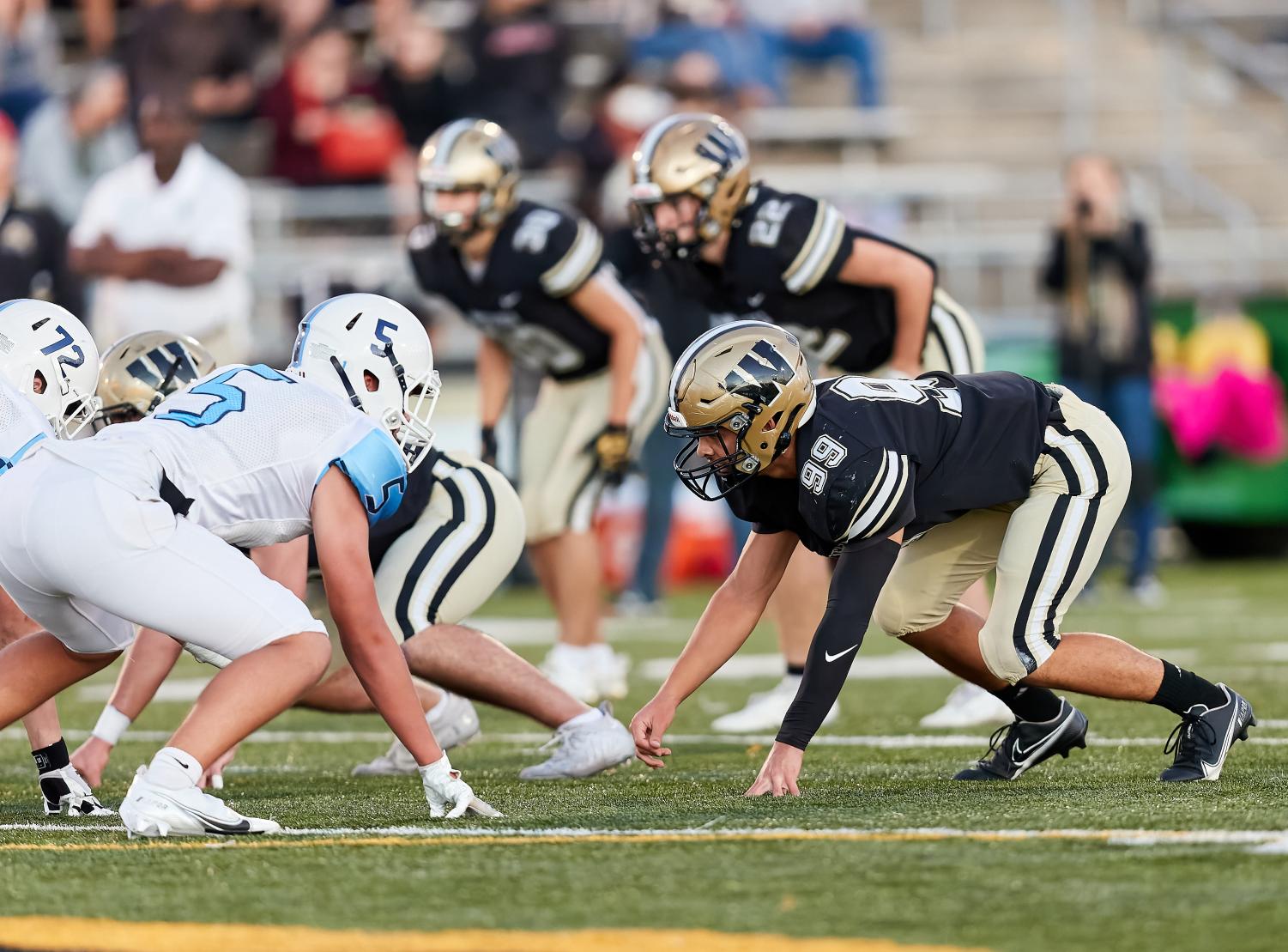 Westfield and Yorktown face to face at the line of scrimmage

The stands erupt with ear piercing cheers as Jahmari Nelson, 11,  fights his way through the Patroit’s defense, scoring Westfield’s first touchdown of the night. The band blares and the Dog Pound is riddled with excitement as their hope for taking home a win for Homecoming gets restored.

Friday, September 24 borught hundreds of bulldogs, past and present, to the homecoming football game for Westfield High School. As the fans began to trickle in at 7 PM, the marching band populated the field. They filled the stadium with sounds from Hamilton, building up anticipation for the big game. The stands were packed, with everyone eager to watch Westfield take on Yorktown.

It was a slow, scoreless first quarter. Both teams seemed to assess the competition and prepare themselves for an “action packed” second. Not too long into the second quarter, Xander Starks, 11, led Yorktown to their first touchdown, along with a field goal, making the score 7-0. The team took a break for halftime to talk over the game in the locker rooms while the Westfield dance team took their place on the field.

Westfield recently adopted a tradition known to students as the “Spirit Court,” a more inclusive form of Homecoming celebration. Nominees included students who showed the most spirit throughout the week, by participating in each day’s theme. The ceremony consisted of each nominee standing with their family behind large boxes. The winner’s box contains balloons while all of the others are empty. Attendees watched expectantly as the nominees each opened their box. The stadium was soon filled with smiles when Robert Frost, 12, opened the lid of his box sending black and gold balloons soaring through the air.

Westfield came back onto the field transformed into a new team hungry for a win. They quickly brought the game into a tie,  with the help of Nelson’s touchdown and a deciding field goal. However, the Yorktown offense was not going down without a fight. It took a few key blocks from  JT Yao, 12,  to get the ball back in the hands of the

bulldogs. Tensions were high as the clock ran out of the Homecoming game. The idea of overtime began to flow through the air.

“I don’t think my nerves could handle going into overtime,” exclaimed Ana Scruggs, 12.

Those ideas quickly dissipated when Zachary Weber, 12,  caught a long pass taking it straight into the End Zone. The Dog Pound roared with cheers as Yorktown set up their offense for their final chance at victory. The Patriots managed to pick up a few yards, but their plans were soon stifled by the tenacious Westfield defense led by Yao. Sighs of relief could be heard on the side of the Home Team.

“I believed in the boys from the start,”  declared Qasim Chaudhry, 12, as the game came to a close.

The Bulldogs survived this one with the guidance of strong senior leaders. Nelson lit a spark in the team early.

“Jahmari is a dog; he is insanely good,” stated Will Hadderman, 12, after Nelson’s touchdown.

Westfield triumphed over a talented Yorktown in front of their largest crowd of the season. The Bulldogs are now 3-2 and are preparing to take on the Seahawks at South Lakes on October 8.