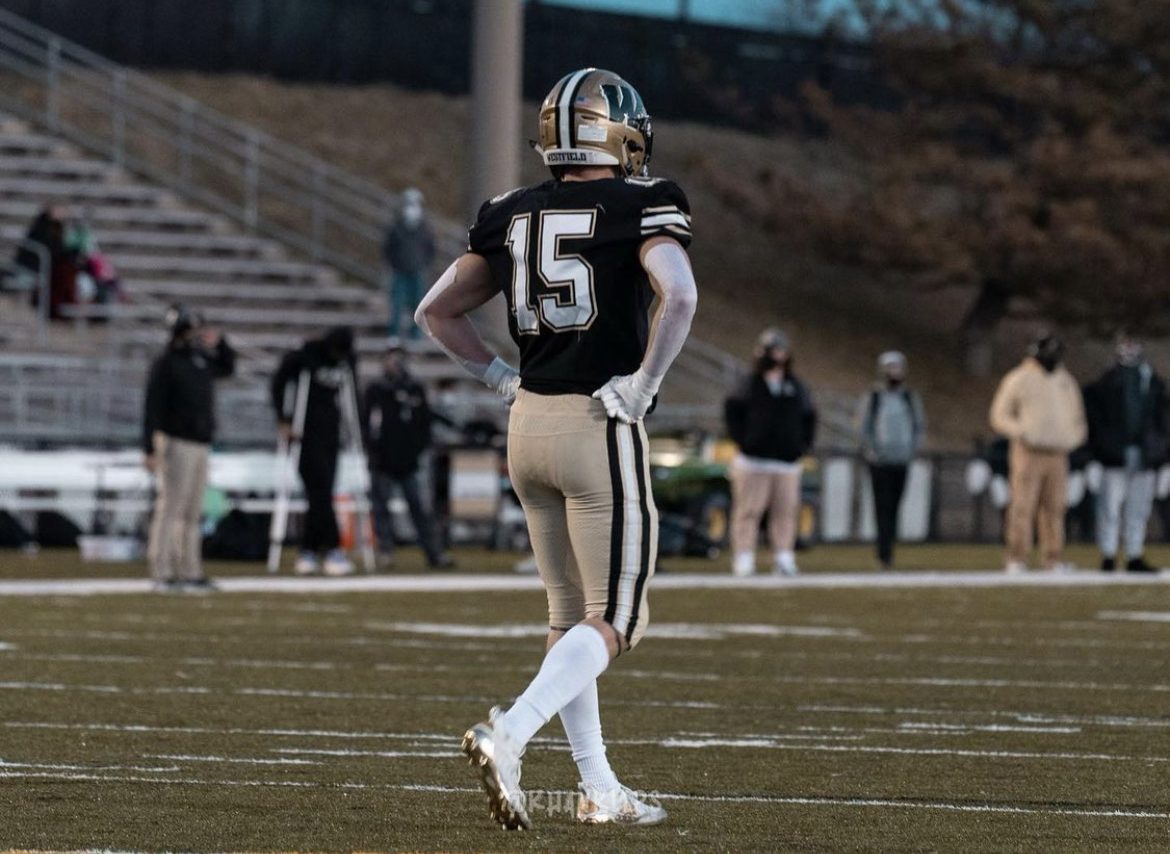 ATHLETE OF THE ISSUE: ALEX RICHARDS

As the players line up for the play, Alex Richards, 12 takes his place near the sideline. It is the rivalry game against Centreville and after a quick glance at our quarterback, he gets set for the snap. Face to face with Centreville’s wide receiver. The play begins and the football is sent spiraling across the field. Richards bypasses the receiver and runs down the field. The football lands in his hands. He rushes past the 30, 20, 10-yard lines and touchdown. The home crowd erupts in cheers.

Big plays like that made by Richards in the game helped secure the win for Westfield. And that is what he is known for, simply being a playmaker.

“Alex is a huge crunch-time playmaker. The whole team, especially his teammates, trusts him to make the big plays when needed. He is highly dependable,” expressed Kyle Simmons, Varsity Football Head Coach.

Richards grew up in Fairfax County with his mother. He started playing flag football at eight and moved up to tackle football when he turned 10. Entering his freshman year of high school, Richards started on the freshman football team. Sophomore year, he moved up and played for both the JV and Varsity teams. For the past two seasons, he has started on Varsity. Over his career at Westfield, Richards has played as both a wide receiver and cornerback. Along the way, he also received First Team All-District and Second Team All-Region his junior year, and this past season, First Team All-District and Region honors.

“My family and friends got me into football. I played for SYA during my youth football years. I played offensive line, quarterback, linebacker, and wide receiver,” said Richards.

Richards trains every day during the season and off-season, including lifting five to six days a week, and either training on the field or some sort of cardio each day. Once the season begins, Richards is completely locked in. Being a crucial part of the team’s game plan, he makes sure to be focused.

This focus has allowed Richards to consistently improve every year and be recruited at the collegiate level. Prior to covid, Richards had a few offers and was in communication with a number of other schools. With the possibility of this past season being canceled, those offers were pulled and communication stopped. Despite this, Richards continued to train throughout the pandemic and gathered film for schools. His persistence paid off as he received an offer from Virginia Tech. Richards was recruited as a wide receiver and cornerback for the Hokies.

“With covid, my recruiting process was very difficult. Tech came at the last minute. They loved my film and did not want to pass up on me even with all the craziness of covid. I am very excited to start my collegiate career there. They have all the resources I need to be the best,” explained Richards.

At Tech, he will study Sports Health with the aim to help himself and others reach their fitness goals. As for football, he wants to be the best player at his positions in college and achieve his dream of being drafted into the NFL.

“My end goal is to make it to the NFL, so I can provide for my loved ones. I have so many people counting on me to make it. I can not let them down. I am looking forward to starting a new life in college. I will have to be a lot more independent which is scary but I am ready for it,” stated Richards.

As he moves on from Westfield, Richards’ character has left a lasting impression on the program from the coaches down to his teammates.

“From my time as his coach junior and senior year, I have gotten to see Alex develop so much as a leader for our team. I saw him be a leader through his actions and everyone on the team looked up to him because of how hard he worked to succeed on the field and in the classroom. He brought experience, leadership, work ethic, and a standard for what a Westfield football player should be. I will miss his character, love for the game, and just how hard he worked. Alex is a special type of young man that will be successful in anything he does in life, not just football,” said Paul Granados, JV Football Head Coach and Varsity Running Back Coach.

“The hard work and commitment Alex has put into football have definitely shown over the past four years. He always finds a way to better himself. As each year went by he progressed even further. It is no surprise that he is going D1 at Tech, he earned all of it,” remarked CJ Hoffman, 12.