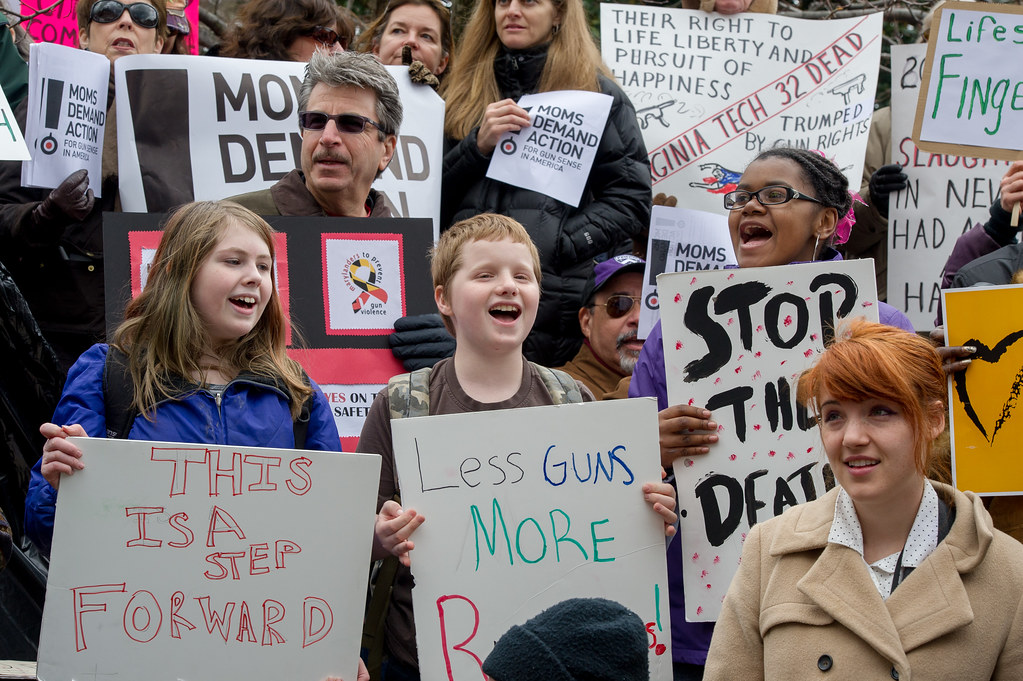 Foolish people who want to destroy America, rallying for laws that would keep guns out of the wrong hands. (Photo courtesy of MDGovpics)

Foolish people who want to destroy America, rallying for laws that would keep guns out of the wrong hands.

The Ironist presents an argument using that mighty tool known as verbal irony, or sarcasm. Irony has long served as an expression of protest– both a weapon and a balm for those living in tough, turbulent times like our own.

In case you didn’t know, we live in the United States of America,  a beautifully diverse country where everyone should be able to feel safe from others harming them. In these dark times, I would like to offer my thoughts to those in fear of their guns being taken away by the government.

This last year has been tough on everyone, but gun owners have had a lot more fright than anyone else. During these last few weeks, I have gathered a panel of experts to share their personal thoughts on this important issue. Gun rights are an important issue to gun owners because any reform would ruin their way of life and cause them to do unspeakable things.

Those Americans who support “gun safety laws” should be ashamed of themselves! So what if some 35,000 Americans are killed by gun violence in an average year? Seems like nothing to me! Lots of folks  in other “developed nations” seem to think we have a problem, but it’s just a small price for freedom.

And so what if some of the most notorious mass shooters in recent history were able to purchase their weapons with ease despite having a history of mental health issues or run-ins with the law? A mandated background check–something that the majority of gullible Americans support for all gun sales–might have stopped those shooters from carrying out their deadly rampages, but that’s far more government regulation than our founding fathers envisioned when they penned the almighty Second Amendment–which unlike any other law in the land, should be completely and utterly barred from any limits. Like the NRA, I choose to ignore any mention of a “well-regulated militia” and just focus on the part that says “uninfringed.” I don’t care about the types of weapons they had then, and the weapons of war we have now, or what was really on the founders’ minds. Some elitist fool recently told me that Thomas Jefferson, founder of the University of Virginia, banned guns from that campus, an action that sort of proves Jefferson favored some limits on gun rights–but I don’t have time or energy for such historical nuances.

As mentioned before, I assembled a team of the brightest gun owners I found on the street. In a groundbreaking discussion I had with Billy Joe, a gun owner, he found it very hard to express his sadness and disbelief with me. Billy has been a lifelong member of the NRA and has only misfired his gun 12 times. When it comes to issues related to his guns, Billy is always very vocal and very passionate, much like other members of his community.

“These freedom haters are trying to take away my way of living because a few people got shot!” cried Billy before breaking into sad sobs. Seeing Billy break down at the thought of his guns being taken away made me shed a tear.

Essentially what Billy said was that he felt like the whole gun violence issue was just no big deal. And, as a reputable third party, I have to agree with him! The (FAKE) Washington Post reported that tens of thousands people died last year from gun violence, but can they really be trusted? Personally, I would never trust a company owned by Jeff Bezos. This is more propaganda that the liberals are shoving down our throats to take away our guns! It is a good thing we have the NRA and defenders of this great organization to save us from our impending doom.

After speaking to Billy Joe I had the opportunity to meet with Melissa Hipócrita, a huge proponent of the NRA, to discuss the negative media surrounding the NRA. Melissa specializes in destroying liberals on online forums during the day. If anyone is reputable in talking about the lies the NRA (hasn’t) said, it’s her. Melissa also hates hearing fake news about her favorite organization.

“All of this fake news just ain’t true. The NRA is a good and honest entity who wouldn’t hurt a fly!”

Melissa is totally right in her view. In fact, the NRA cares so much about safety that they banned guns from an event in 2018 that Mike Pence would attend! It is so great that they care about his safety. The last thing the NRA wants is for an innocent person to be shot, and this proves it! The NRA has also advocated for the use of assault weapons and high-capacity magazine weapons in the past. They really care about the safety of the public if they recommend weapons like those! Even in our darkest times in recent years we can always count on the NRA to be honest with us! Other advocacy groups the size of the NRA would be money hungry or greedy, but the NRA is totally different.

NRA President Wayne LaPierre is so concerned about safety that a few years ago, he tried to spend 6 million of the NRA’s tax exempt dollars to protect his own (safety, that is). After a bunch of mass shootings, LaPierre decided he needed to buy a Texas mansion–complete with golf course and lakefront views–as a safe haven from mean people who might assault him with a firearm (which they could purchase without a background check since those are not always needed, thanks to LaPierre’s valiant efforts). The lamestream media attacked LaPierre’s dream of a luxury fortress, and a bunch of meanspirited lawyer-types shut it down. They got away with it, too,  which is why I am keeping this brave, selfless leader in my thoughts and prayers.

Perhaps the greatest example of how much the NRA cares about the American people comes in the form of the children’s books they released four years ago. In case you’ve been living under a rock, the NRA released a series of updated fairy tales where they gave beloved characters guns. If you think about it, the best way to ensure we have a generation of freedom lovers is to teach them while they’re young!! Have you ever wondered how Hansel and Gretel would have ended if they had guns? Well, thanks to the NRA, you don’t have to wonder anymore! Thanks to the guns added to these stories we can rest easy knowing that Hansel and Gretel can fight back against the witch. The guns also led to less violence in these stories, which is something that occurs in real life too! With all the guns in America, I know that there is safety all around us. It’s a vital lesson for our youngest tikes!

Guns are an essential part of the American way of life, and to take them away from the people because a few nobodys were shot is disgusting! Any proponent of what the liberals call “gun control” just wants to take the rights away from the people. Luckily we have the amazing entity known as the NRA to protect us. It is because of them that people all around the country feel safe, including our gun-loving children!