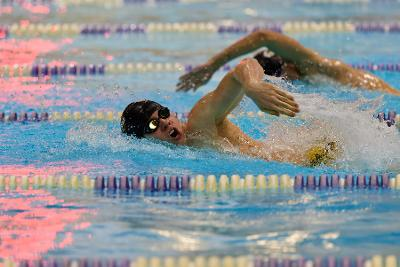 ATHLETE OF THE ISSUE: WILLIAM BEAMON

Waiting steadily by the cold cement of a swimming pool, William Beamon, 12, feels adrenaline slowly sneak into his nerves as he anticipates his cue: “Ready, set, go!” Like a bullet shooting into the calm water, he suddenly dives, skillfully traversing the pool and speeding up as the cheers from the audience get louder. Finally emerging from the water after reaching the finish line, Beamon realizes he just won his last game of the day.

“I think what is so unique about William is that he has this ability to go faster during a race than he has ever gone before… You can just see him physically going faster the more that people cheer,” observed Russell Ramey, Westfield Swim and Dive Coach.

Having been involved with athletics all throughout high school, Beamon has had the opportunity to participate in several different sports including basketball, lacrosse, and swim. But despite this, he claims no other sport can quite match up to his abiding predilection for Swim: “I prefer Swimming the most because everyone involved with the program is supportive of each other and just wants to have a good time.”

In addition to his apparent relaxed perception of the sport, Beamon also admires Swim for its more technical aspects. He elaborates, “Swimming varies from all other sports that I’ve played in high school. I liked the concept of knowing exactly how many people were faster than me and exactly what times I needed to get to reach certain goals. I think that is one of the main reasons I became passionate about a sport that I had no intention of competing in when I entered high school.”

Acknowledging his lack of interest for swimming prior to his junior year of high school, Beamon frequently alludes to his coach when discussing the origin of his newfound passion. He remarks, “I think Coach Russ influenced me the most. I actually met him on my summer swim team right before he took over the head coach role for Westfield, and he was the person who convinced me to swim. He basically trained me from someone who just swam for fun during the summer to a pretty competitive swimmer in just a few months.”

It seems Coach Russ’ influence on Beamon’s swim performance has been nothing short of galvanizing. Perhaps Coach Russell himself said it best: “For [Beamon] to swim and reach the milestones that he did was just incredible. His swimming background prior was simply swimming in the summertime and in high school — and last year he made States. It’s just an incredible performance.”

In fact, in just the short time that he has spent swimming, Beamon has been bestowed with several accolades, such as winning third place in Districts this year, as well as sixth place in Regionals. The only reason why Beamon did not participate in States is due to the alteration of the qualifying swimmers selection process this year because of COVID-19.

According to Coach Russell, “William came in sixth at our Regional Meet. If it had been a typical year, he would have been seated seventh in our State in his event.”

Despite his impressive athletic achievements, Beamon’s talents extend further than simply sports. Not only is he a well-rounded and hard-working student, but he also boasts the title of being the co-founder of Westfield’s Lettuce Club.

Rebecca Darr, Lettuce Club Sponsor, describes this club to promote “healthy eating habits” and states “Stay safe, and Stay green” to be the slogan. Beamon additionally explains, “We promote healthy eating and a plant-based diet, but anyone is welcome to join.”

Considering his multitude of responsibilities, when asked how he stays on top of his schoolwork while also maintaining his extracurricular duties, Beamon credits time management: “I’m kind of known for trying to do too much and I end up always being late to things because of it. But I think that once you create a habit out of your schedule, it’s much easier to manage your responsibilities.”

Currently, Beamon looks forward to attending Virginia Tech in the fall as a business major. Although he is not planning to pursue swimming as a professional career, the sport will always hold a special place in his heart: “I most likely will be doing some form of volunteer coaching all throughout my life. I’ve been coaching different sports for 3- 4 years now and I enjoy doing it, so I cannot think of any reason I would stop.”