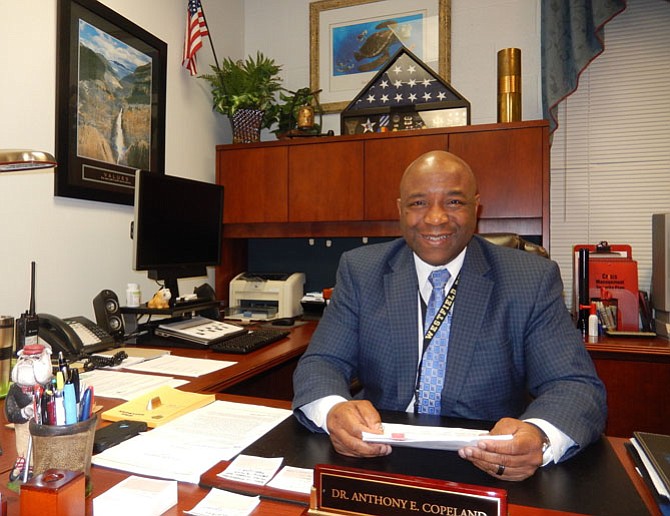 Dr. Copeland in his office. (Photo courtesy of Connection Newspapers)

Dr. Copeland in his office.

As he stared for the first time, astonished, at the vast green area encompassing his range of view on the outskirts of Westfield High School’s majestic football field, a visiting Stafford County Assistant Principal confirmed to himself that Westfield was the embodiment of his ideal school.

In 2015, Anthony Copeland, FCPS Executive Principal, now a revered Westfield ex-principal, was working on his PhD Program at William & Mary. He admits that although he aspired to work in Fairfax County, he was inclined to choose Stafford due to Fairfax’ proximity from his college: “Stafford was the furthest north I could come to work and still get to classes at William & Mary in time… but I always wanted to be in Fairfax.”

Copeland got the opportunity to visit Westfield when his school’s  soccer team in Stafford County competed in the State 5A Championship, hosted in Fairfax County. As he now prepares to bid farewell to his previous five years as principal at the school, and embark upon a new journey as the FCPS Executive 1 Region Principal, Copeland reminisces about his first encounter with Westfield, “I will never forget just looking around and going ‘wow.’ I was amazed at how beautiful the campus was and the beautiful stadium, it was just so impressive.”

Copeland formally arrived at Westfield as principal in September of that year. According to staff, his first contact with the school was nothing short of memorable.

Andrew Donnelly, Physics teacher, recollected, “I can distinctly remember that he was really interested in how things were done at Westfield and wanted to take it all in before trying to throw his thoughts or opinions into the mix.  I also remember that when he was first introduced to the staff we were told he was a veteran and I was totally terrified because I am not good with strict rules and I was so afraid he was going to treat school like boot camp!  But I was completely mistaken. Dr. Copeland was always relaxed and thoughtful in any interaction I had with him.”

Despite the enthusiasm  supplementing his entrance to Westfield, Copeland recalls facing difficulty getting adjusted due to his lack of knowledge regarding the staff and daily procedures of the school. He recalled, “I used to be in Westfield till 7 or 8 at night, just trying to figure out who to send [important school related documents] to.”

However, as the years progressed, Copeland successfully transitioned into one of the most knowledgeable, supportive, and contributing principals in Westfield’s history – as proved by first hand testimonies.

According to Donnelly, “He was… always open to a quick  talk or hearing my thoughts on what the state of the school was. As a class sponsor every year he was here. I also got to see how he interacted with kids. He remembered their names and was interested in what they had to say as well.”

Another staff member, Christy Jenkins, Math teacher, similarly elaborated on Copeland’s supportive nature: “During his 5 years here we built a working relationship where I think he trusted I did my job well and he knew I had the students’ learning and character as my number one priority at all times. I grew to learn that he would support me when I needed him.”

Copeland’s impact was not only perceived by staff. One student, Judy Troya, 11, expounded, “I remember Dr. Copeland always interacted with students in the hallways whenever he got the chance. One time he talked to me and my friend because we had cookies and we even offered him some.”

But perhaps one of Copeland’s closest co-workers, Kyle Laspe, Assistant Principal, speaks about Copeland’s competence the best: “Dr. Copeland was always calm and collected through the most difficult experiences we have in school leadership. No task was ever too much to handle and I am confident that is why Region 1 promoted him.”

“There have been a lot of very talented people to come through to Westfield, and I don’t think people appreciate how talented they are,” elucidated Copeland. “[The school staff and I] worked together and really brought a team approach to solving some big problems… It made a really big difference.”

Additionally, Copeland marvels at the notable success achieved by the students of Westfield, as he prepares to commence his new position, as soon as the next principal is decided upon.

Copeland adds, “There were other things that we were winning too, that were not getting as much publicity. We were becoming very very competitive in theatre, and our band was always good and it was getting recognized. We were doing really well in the Science Fair and kids were getting recognized… And I just always really wanted to be there to see our kids do well. It just meant a lot to be there, and not just because I was principal. It’s not just my job, I really enjoy it. To see kids happy, to see them in another setting, is such a positive thing.”

In fact, Copeland admits that the ability to observe the success of and interact with Westfield’s students first-hand is what he will miss the most. It seems that the duties aligned with the position of Region 1’s Executive Principal exclude the ability to connect with students individually: “It concerns me that I will not be able to [have that connection] that anymore. I will still visit schools [as Executive Principal], but I won’t have that connection. That’s the bad thing as you move up in your career in education – you get further and further removed from kids and other people.”

Despite this, Copeland looks forward to pursuing this new turn in his career and furthering his goals of making a difference in his community. Westfield, on the other hand, awaits the conclusion of the selection process for the next principal, expected to get revealed in March.

As the anticipation regarding the next principal deepens, Jenkins mentions some wise words that all of the Westfield community should keep in mind: “Change happens. We have had new principals before. We learn new things. We do new things. Sometimes we like it, sometimes it is harder to change the ways we are used to. We have to trust the person that leads us. Just like times changes policies, procedures, expectations, rules, behavior and what we hold ourselves accountable to have to change. The person in charge just helps us become versions of ourselves. We learn and grow every day.  We are an amazing school , we are bulldogs, because of our students, faculty staff and we will remain just as amazing with a new leader.”

Copeland, in agreement with Jenkins, looks positively upon the new turn of events and plans to keep up with news regarding Westfield following his departure.

According to Copeland, “I love Westfield. It will always have a very special place in my heart and anybody from there, I will always look out for them. You gotta make sure to treat all bulldogs right.”