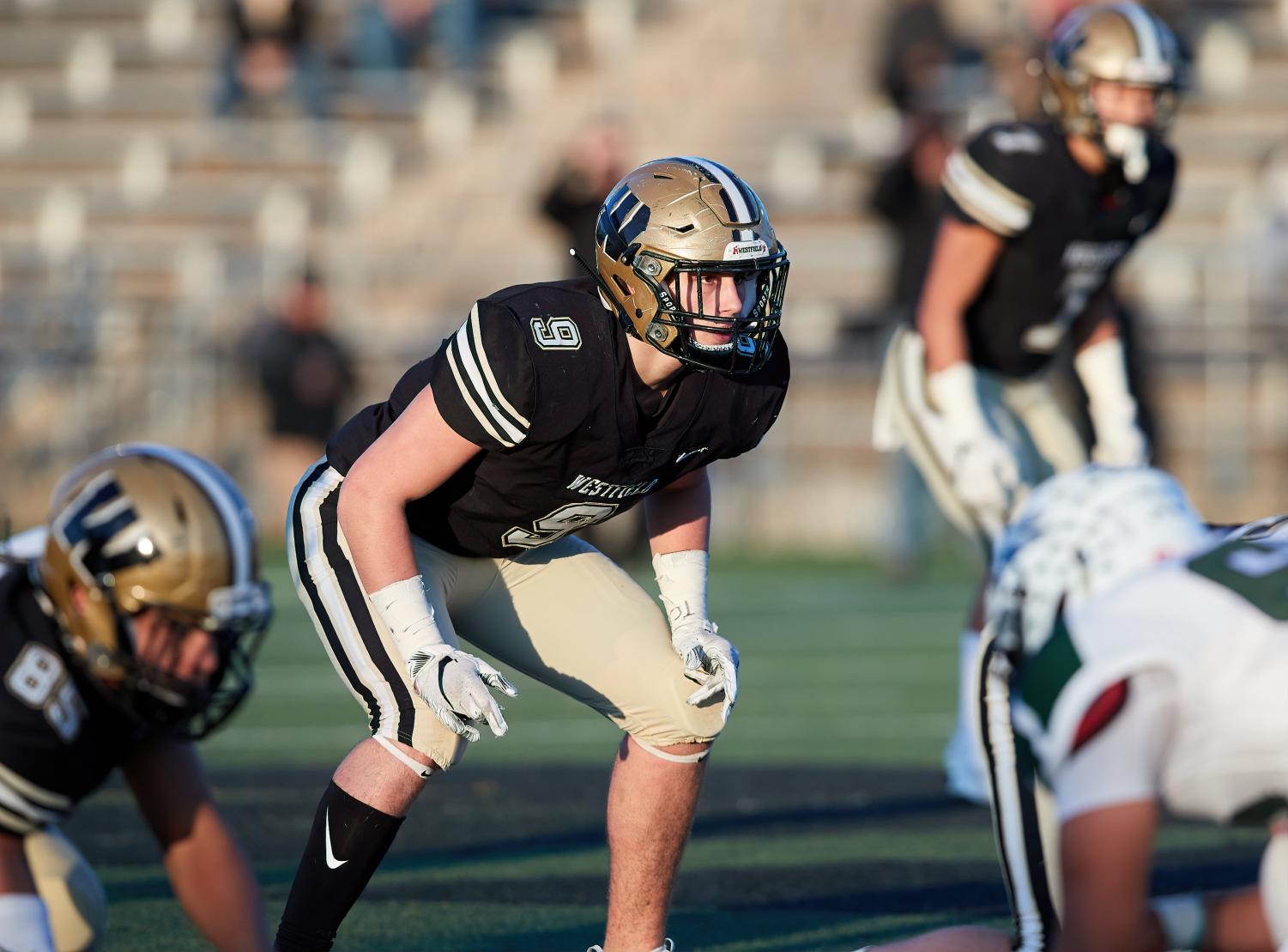 Hoffman waiting for the play to start. Photo Courtesy of Fred Ingham (delbray.com)

Hoffman waiting for the play to start. Photo Courtesy of Fred Ingham (delbray.com)

ATHLETE OF THE ISSUE: CJ HOFFMAN

Under the stadium lights, at the one-yard line, CJ Hoffman, 12, waits in the center of the defensive formation for the opposing team’s quarterback call. The play starts and Hoffman rushes the running back and tackles him, stopping the drive.

After hours of intense conditioning in the blistering summer sun, lifting, and watching film, these are the moments Hoffman trains for. For the past three years, fall has brought a football season. As Hoffman heads into his senior season, football will be in the spring this year. Regardless of the time of year, he is still driven to end his high school career at the top.

The football came to Hoffman at an early age; his passion began when he watched NFL games with his dad. Soon, he was on his first league team and his love for the game has only grown since.

“It was never a matter of if and rather when I would start playing football. After my first season in second or third grade, I was hooked,” said Hoffman.

For Hoffman, the competitive nature of the sport paired with the team’s camaraderie is his favorite part about football.

“I love the challenge of the sport and being able to challenge myself. Football allows me to push myself and give me time to relax,” explained Hoffman.

During his time at Westfield, Hoffman started on the freshman team, progressing to the varsity team for consecutive seasons as a middle linebacker. Hoffman’s humility and will to learn propelled him onto the competitive varsity squad.

“Since freshman year, I looked up to the varsity players and emulated their habits and work ethic, and got as much advice as I could from them. I decided on where I wanted to be and what I wanted to work towards in the coming years,” stated Hoffman.

Hoffman was a part of the back-to-back District and Regional Champion teams. Over the past three years, his team has attributed his constant drive to improve and selflessness to his development into a key, reliable player; he is known for intently analyzing film, his leadership, and being one of the first guys to arrive on game day to focus in.

“CJ is a student of the game. He watches a ton of film, which has increased his football IQ. Over time, he has become a vocal leader for the team. He also just wants to get on the field. I can remember having a discussion with him in the spring of his sophomore year. We were talking about what role he would play next season and he said he just wants to play. He didn’t care where. He just wanted to be on the field contributing. He really loves the game and it is fun to coach unselfish players who just want to play and play hard,” remarked Kyle Simmons, Head Varsity Football Coach. With the uncertainty of sports earlier this year, Hoffman still trained through the lockdown. Now with a planned season, he is hopeful to get on the field with his team.

“I always want to set my goals high, starting by improving from second-team all-district to first-team all-state. Bringing the state title back to Westfield is the biggest goal for all the guys and I. Losing out in the semi-finals the past two years has only made us want it more than ever this year,” said Hoffman.

As Hoffman works toward this season, he looks forward to the next as a collegiate player. Over the summer, Hoffman committed to Howard University. The lockdown altered his recruitment process. Athletes were not allowed on campus for official visits to meet in person on campus with collegiate teams. Despite this, Hoffman feels as though Howard is the best place for him to take his game to the next level.

“I felt a sense of home when talking with the Howard coaches. They maintained fluid communication not only with me but my parents as well, and I could feel they cared about me as an individual as well as a player. This assured me [that] committing there was the best decision,” explained Hoffman.

While the uncertainty of this football season continues to linger, regardless of whether he steps on the field again for a game, Hoffman will treasure the time he had with the team.

“The team at Westfield is special: no one feels like an outsider. It is like a brotherhood in the locker room. The mental toughness and hard work of the entire team have influenced my game as a player, and the bond I had with them will be something I will never forget,” said Hoffman.