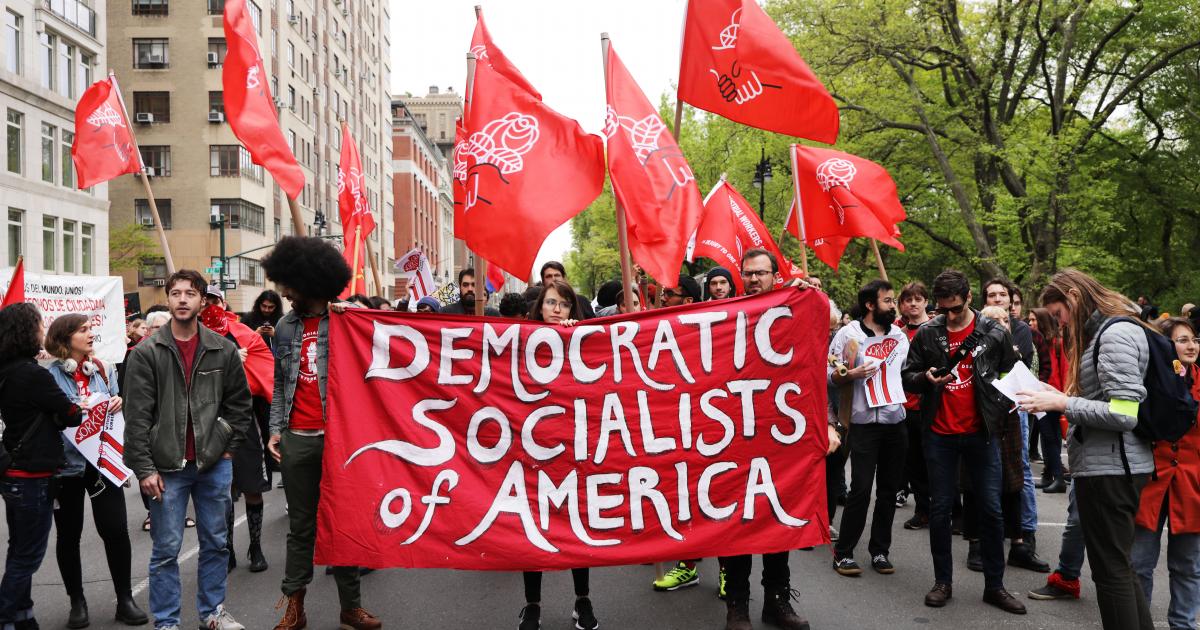 The Democratic Socialists of America rallying in New York City.

The word “socialism” has plagued 2020 election discourse, a term used most prominently to discuss the agenda of then-Democratic candidate, Senator Bernie Sanders, who refers to himself as a Democratic socialist. Supporting programs like Medicare-for-all, free public college, and a Green New Deal, Sanders and the progressive left hope to greatly expand social programs in the US, much to the dismay of Republicans and moderates alike, who fear the country would be rapidly moving towards socialism. And even though Sanders has dropped out of the presidential race, the more moderate policies of the presumptive Democratic nominee, former Vice President Joe Biden, are still alarming to many conservatives.

In February, President Trump claimed, “Everyone knows [Biden’s] not a communist … but he’s definitely a radical-left socialist Democrat, and people know that.”

But how much “socialism” do progressives actually support? Where does the country fall on the continuum between capitalism and socialism?

According to the Oxford Dictionary, socialism is “a political and economic theory of social organization which advocates that the means of production, distribution, and exchange should be owned or regulated by the community as a whole.”

Their definition of capitalism is “an economic and political system in which a country’s trade and industry are controlled by private owners for profit, rather than by the state.”

According to another survey done by Yahoo News/YouGov, 62% of Americans say that Sanders is a socialist. Only 38% believed there was a distinction between socialism and Democratic socialism, while 38% said the two ideologies were the same, and 24% said they were not sure.

This negative and skewed view of socialism (even Democratic socialism), the same view that led Trump to call

Sanders a communist, is a misconception rooted in the Cold War stigma surrounding socialism and linking it with communism. When many Americans think of socialism, they picture totalitarian regimes, like North Korea, or poor Latin American countries, like Venezuela. However, progressives like Sanders look towards Scandinavian countries, like Denmark, as models for mixed, Democratic socialist economies.

But what is Democratic socialism, or American progressives’ version of it, anyway? Far from a community owned market and true socialism, the ideology is based on the expansion of social safety nets present in the country, largely through taxpayer funded welfare programs. In many Nordic countries, there is a public option for healthcare, free higher education, as well as vast benefits for the unemployed, disabled, and elderly. However, it is important to note that this expansive welfare state is usually a result of a diversified, productive, mostly free market combined with extremely high tax rates. In Denmark, for example, the lower class pays about 56% in income tax; additionally, there is a 25% sales tax on every item. These tax rates are ones almost guaranteed to never be present in the US, though, which then poses questions about financing progressives’ ambitious plans.

But what kind of a welfare state does the country already have?

A Brief History of Social Programs in the US

Before the 20th century, it was generally up to local governments and charitable organizations to provide public relief when needed, an exception being the 1862 Civil War Pension Program. In the early 1900s, state governments began to play a larger role concerning social programs, and by 1926, 40 states had public relief programs for mothers and, in some states, pension for the elderly. At the national level, there was minimal involvement in public relief.

The real development of a welfare state emerged after the Great Depression.

In 1932, Hoover signed the Emergency Relief and Construction Act, designed to help states with funding, curb unemployment, and aid the agriculture industry. In 1933, FDR passed the Federal Emergency Relief Act, which gave over one billion dollars in funding to states to aid their public relief programs.

1935 saw the passage of the Social Security Act, which FDR designed to provide Americans with security against uncontrollable life events. The act included unemployment insurance, old age and survivors insurance, and state-federal assistance for the old, blind, and dependent children. In 1950, aid to the disabled was also added.

In 1965, President Johnson enacted both Medicaid and Medicare, designed to provide healthcare to the elderly, as well as people below a certain income bracket.

The various programs to aid the disabled, elderly, and blind were combined in 1973, with the creation of the SSI program.

Since 1990, the ACF has given federal grants to the Head Start Collaboration program, a partnership between Head Start and states to help economically challenged families across the country, especially with children’s development.

In 1996, Clinton took on welfare reform, intended to lower the numbers of families on welfare, which he did. That year, he passed the Personal Responsibility and Work Opportunity Reconciliation Act (PRWORA), which replaced the AFDC with the Temporary Assistance for Needy Families, and gave states more control over social welfare programs and limits on them.

Finally, in 2010, Obama enacted the Affordable Care Act (ACA), which expanded Medicaid to adults below 138% of the poverty level, as well as providing subsidies to those between 100-400% of the poverty level. The ACA insured around 20 to 24 million more Americans by 2016.

Where are we now?

It is undeniably true that the country depends heavily on capitalism; it has the greatest economic output of any country with a free market. But the US is far from true laissez-faire capitalism. In the country’s mixed economy, the free market is substantially regulated, and the government covers or is involved with sectors like education, the justice system, infrastructure, healthcare, and the postal service. Furthermore, almost all businesses in the country are subject to some form of government regulation or intervention, whether it be through subsidies, licensing, regulation through a government organization (like the FDA), etc. Also, as explored, the country has an active welfare state, with Social Security accounting for $1.1 trillion of the federal budget, the most costly item, and Medicare and Medicaid being third and fourth, using $649 billion, and $418 billion, respectively.

Where the US lies exactly on the spectrum as a mixed economy might very well depend on the November election.

If Trump is reelected, his second term might include cuts to Social Security, Medicare, and Medicaid. Despite his promises to not cut funding to these programs, his proposed 2021 budget included, over the next decade, a reduction of $505 billion from Medicare, $35 billion from Social Security, and $846 billion from Medicaid. He and other Republicans have also made significant cuts to the Affordable Care Act, which he would presumably try to further remove from legislation.

On the other hand, if Biden were to become president, policies like free two year community college, expansion of the ACA, and climate change resolutions would definitely expand government control, pushing the US further left on the economic scale, if they were able to pass through Congress.