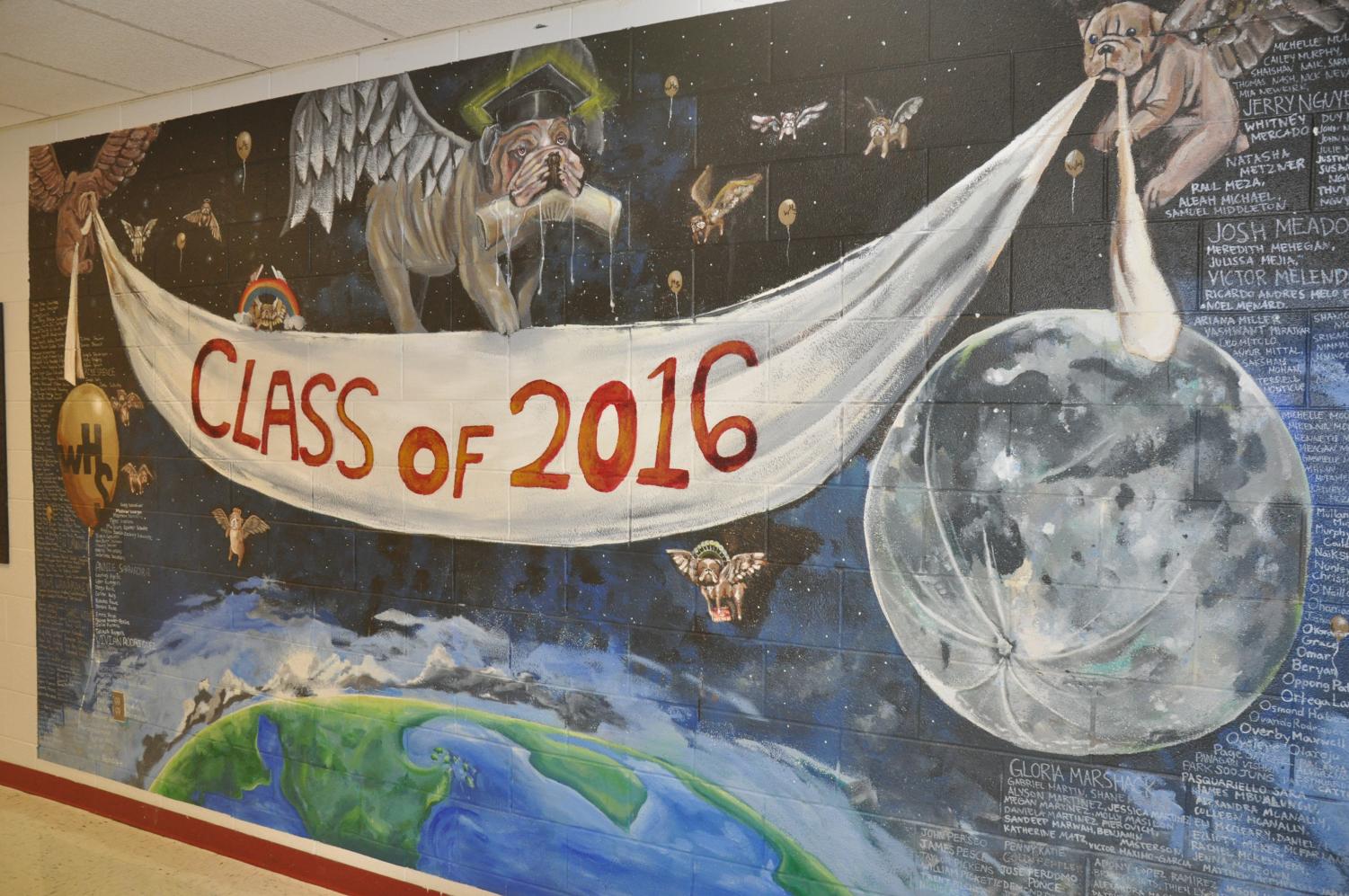 For some of us, 2016 does not feel like that long ago. Located in the hall that connects A and C hall, the mural for the 2016 graduating class features angel-like bulldogs floating above the earth, surrounded by the moon and stars. Clearly, the Class of 2016 wanted to be remembered for their uniqueness and creativity. The mural also has a little rainbow with a bulldog in it, undoubtedly a nod to the Pride movement and the legalization of same-sex marriage, a milestone reached during that school year.

Along with Pride, the schoolyear was one of transition, change, and impassioned social movements, even right here  at Westfield. In 2015 Mr. Tim Thomas was replaced by Dr. Copeland, who is still our principal to this day. Also, the 2015-2016 school year was when Fairfax County switched the start time of  high schoolers with that of middle schoolers. Prior to that year, Westfield students had to drag themselves to school by 7:20 AM. As someone who was an incoming freshman that year, it was nice because we never had to wake up at that earlier time.

By far the biggest news around the school was that our football team won the state championship against Oscar Smith High School. We did not know it at the time, but we would go on to win three state championships in a row, all against the same school.

Around the country, America was preparing for a huge presidential election as President Obama was closing his second term in office. The nation became embroiled in a heated contest between Democratic candidate Hillary Clinton and Republican candidate Donald Trump.

This was also the year the Black Lives Matter movement gained national attention for taking a stand against police brutality in America. The students of Westfield rallied behind this message.  Tariq Shanks, Class of 2016, created the Black Student Union club, remarking in the 2016 Yearbook that his organization aimed to “teach students about black history and culture.” To this day, the Black Student Union has a strong presence at our school.

In pop culture, the biggest rage around Westfield were Snapchat filters. First introduced in September 2015, they quickly became popular among teenagers all over America. During lunch, you could not walk through the cafeteria without seeing multiple people taking selfies with barfing rainbows or dog ears.

That year in the Oscars, six-time nominee Leonardo DiCaprio finally won his first Oscar for Best Actor for the movie The Revenant. Additionally, #OscarsSoWhite trended on Twitter, attempting to expose the academy for continually choosing white people or white movies to win awards while disregarding minority talent.

This was also the year memes began to be much more relevant and talked about. The popular memes of that year were the Mr. Krabs Confused meme, Harambe, and Damn Daniel.

Overall, 2016 was a year of change and growth. Both Westfield and America were adjusting to major cultural shifts and speaking out against inequality in the name of justice. The world became faster and crazier than it had ever been before—all of which highlights the value of  the 2016 mural’s celebration of unity and idealism.