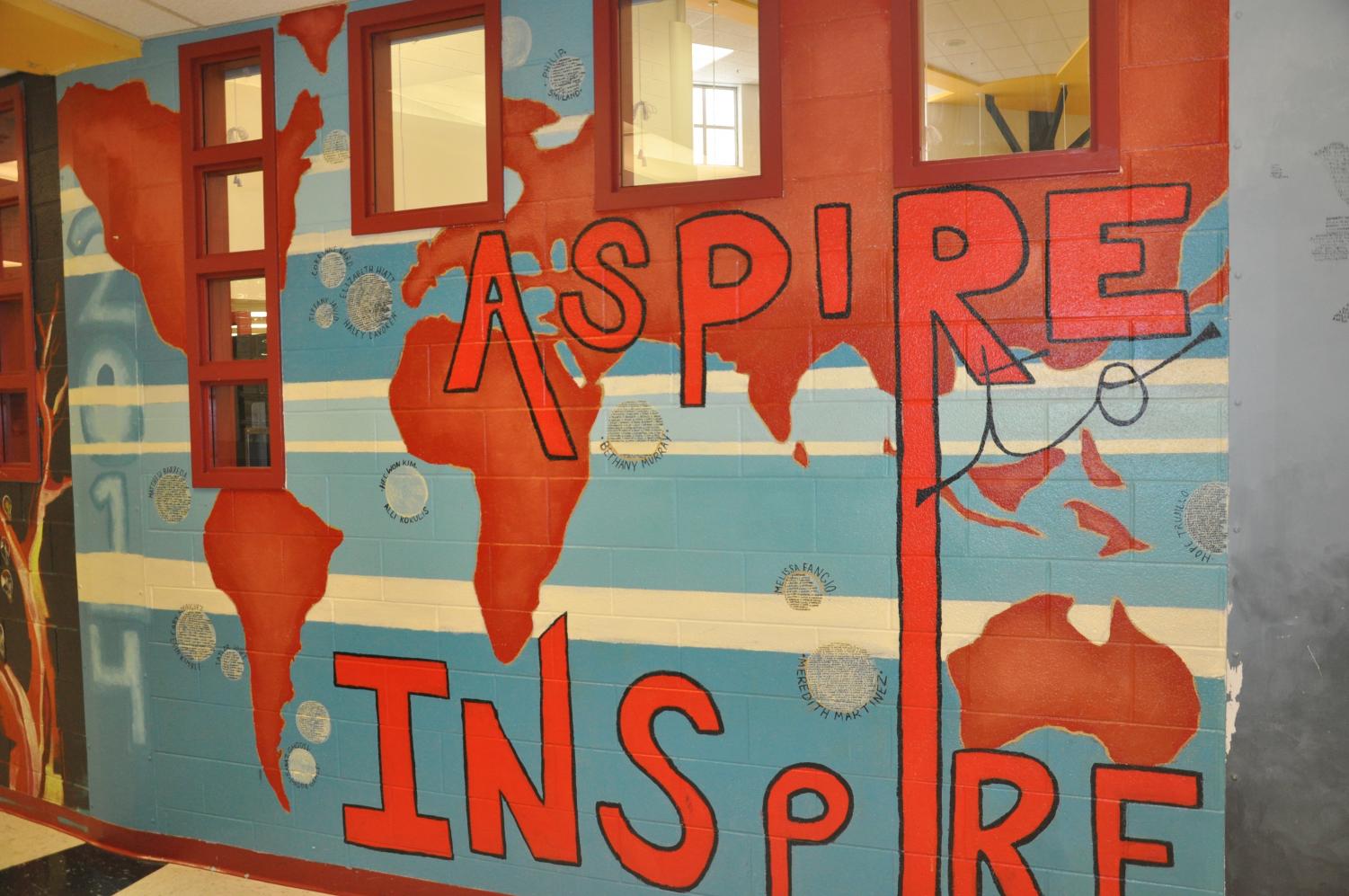 The class mural for the 2013-14 mural memorializes almost 600 students who earned their diploma from Westfield High School that year and have since scattered far and wide. Their names are etched into the school’s very walls. Adorning a downstairs wall adjacent to C hall on the familiar wheel surrounding the library, the mural’s intricate design displays a world map. Colored light blue and vibrant red, the design is simple but creative. The theme is projected in bolded words–“Aspire” and “Inspire”—suggesting that the graduates would make an impact on the world by reaching high and lifting others through their bold actions.

A year filled with excitement and disappointment, innovation and change, 2013-14 proved to be a roller coaster of emotion. A swimmer with a motor in the water impressed his peers while women’s field hockey brought home the rings. Wrestling and Track made some noise in the district, and Westfield’s band punched a ticket to the Rose Bowl. Westfield theatre put on Flowers for Algernon and Laughing Stock, while students continued to succeed academically. The school year also witnessed a steady rise in the prevalence of technology, including phones and tablets that introduced a revolutionary change to public schools. Most importantly, Westfield’s senior class enjoyed a final school year they would surely never forget.

Focused and determined, the girls field hockey team looked for a title in Virginia Beach while the supporters back home watched in anticipation. By a score of 2-1, the team’s first state championship came to fruition, and a trend was set for other Westfield teams’ success. Swimmer Brandon Fiala, wrestler Beau Donahue, and track and field runner Nathan Kiley were deemed state champions as their respective sports dominated the Concorde District.

Basketball started off 6-7. Head Coach Doug Ewell, quoted in a Westfield Watchdog edition that year, stated, “My expectations are always the same: to do well in district play and put yourself in a position to win the district tournament.”

In 2013 Westfield football finished second in the Concorde District behind rival Centreville with an 8-2 record before rallying to win three playoff games, including a 19-16 upset over previously undefeated Lake Braddock. They later reached their third straight regional final, the second in three years against the Centreville Wildcats. In that regional final, however, the Bulldogs were soundly defeated by the eventual state champion Wildcats, 35-14. The Bulldogs finished the season 11-3. Despite coming up short in top sports basketball, football, and baseball, the Westfield athletics still represented well.

Months after the 2011-12 fall marching band’s season ended, Westfield High School Band Director Stephen Panoff ordered students into parade lines to run drills on roll-stepping and keeping straight lines and good posture while playing their instruments. Panoff hoped for a big pay-off — one that he ultimately cashed in on. During the marching band football halftime show in late September, a loudspeaker announcement told students the band would march in the 125th Rose Bowl Parade, part of the Tournament of Roses in Pasadena, California, to take place on New Year’s Day 2014.

“We went crazy when the guy announced it on the speaker,” said Westfield junior trombonist Chandler Comer, 11, quoted in a Watchdog article. “People were running into each other, hugging.”

As for Westfield’s theater department, Brandon Sanchez, Mitchell Buckley, and Alex Mann starred in the winter mainstage production Flowers for Algernon. Buckley also had the lead in the fall mainstage production. “I love acting and found it is a good way to express myself and reach out to people,” said Buckley, quoted in a Watchdog article.

On the national news stage of 2013, stories such as the Boston Marathon bombing and the Cleveland kidnapping captivated the world. People also eagerly awaited the verdicts from the controversial George Zimmerman and Jodi Arias trials. New words “twerk” and “selfie” were added to the dictionary, and the world welcomed a new pope and a new royal baby.

Diversity, a willingness to succeed, and inclusiveness inspired the 2013-14 class to propel forward and make a difference. Students left Westfield with motivation to influence those around them in a positive way.

Among those who passed away that year, renowned actor and comedian Robin Williams once expressed a belief that reflected this graduating class: “No matter what people tell you, words and ideas can change the world.”