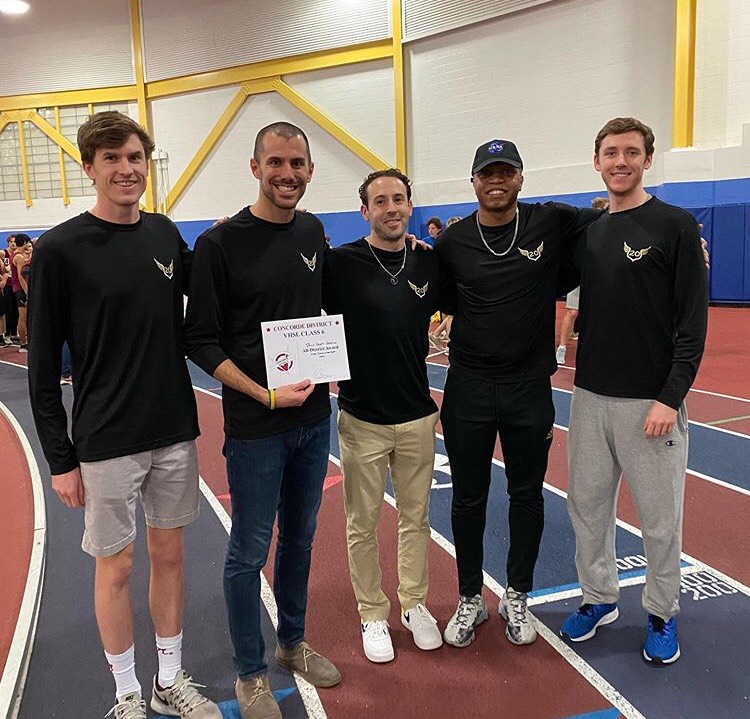 Groff celebrates the girls’ Indoor Track team title alongside his other coaches.

COACH OF THE ISSUE: COACH GROFF

As the bus returns to the school after a long day of racing, David Groff, Track head coach and assistant Cross Country coach, high-fives his athletes, reminds them to run on their own, announces when the next practice is, and, most importantly, studies them.

Groff watches his athletes’ varying expressions of excitement and joy to disappointment and sadness, emotions typical of runners following a meet.

While returning equipment to the track, Groff too recalls the day’s events, planning how to progress towards the next meet and sympathizing with his athletes’ emotions. Over a decade ago, Groff experienced the same highs and lows along with the rigorous practice schedule as a former runner at Westfield.

Since returning back to his alma mater, Groff currently works as an Instructional Assistant in Special Education and is currently in his fourth season as a coach.

Growing up in the area with his mother, Diann, and older brother, Michael, Groff went to Oak Hill Elementary until fifth grade when he moved to Centreville. There he went to Cub Run Elementary, Stone Middle, and Westfield High School.

Groff’s 2004 graduating class was one of the first at newly opened Westfield. As a freshman, he joined the cross country team under Scott Bergquist, former cross country head coach. Following the fall season, Groff decided to quit his childhood sport, soccer, to pursue his interest in running.

“Once I got into the indoor track season, I knew I was going to stick with it and take the risk to see what I was capable of in the track versus soccer,” explained Groff.

This risk paid off as he went on to contribute to the Boys’ 2004 outdoor track state team title under Emily Utter, former head track coach, and Todd Utter, former assistant sprints coach. Groff finished out his high school career with multiple titles on the district, regional, state, and national levels. During his senior year, Groff committed to the College of William and Mary on a partial athletic scholarship for cross country and track.

“Groff would eat and do all the right things to be as best prepared as possible. Always eating his peanut butter and banana sandwich before meets. He was also a very dedicated runner. Groff was ahead of the curve over a lot of his teammates because of that. If a coach told him to do something he would do it. My wife and I are very proud of how he has carried the program and his success as a coach,” remarked Mr. Utter.

Once adjusted to life as a collegiate athlete, Groff continued to lower his personal bests. By his senior year, he became CAA champion (1500m), IC4A champion (4×8 relay), and an All-East runner (1000m).

“I definitely went through an adjustment period in college. I was injured quite a bit during my freshman and sophomore years. When I got used to my routine in the latter half of college and learned how I needed to recover in order to stay healthy, I was able to be successful,” explained Groff.

At William and Mary, Groff studied psychology with original ambitions to be a guidance counselor. His same passion for wanting to impact older students led him to work in Special Education and as a coach.

Beginning his first four years coaching at Centreville High School. In 2017, Groff started as head track coach at Westfield. Groff had to transition from an athlete and grow into the position of head coach, a task once tough for him as he lost the power to directly impact races that he had as a runner. His coaching style is best described as team-oriented. Team goals are prioritized over everything else; Groff instills in his runners the importance of sacrificing for each other.

In his few years as head coach, Groff has had district, regional, state, and national-emerging elite champions alongside seven district team titles. He looks to continue the team’s success thus far throughout the postseason.

“Changing coaches during the indoor track season of my sophomore year was nerve-racking for me. A lot of us were unsure about how we would like Coach Groff. When I was injured during this time, I got to spend a lot of time with Coach Groff. He has pushed me a lot further than I thought I could go. With each workout, I leave a better athlete,” said James Johnson, 12.

After the school day and practice, Groff heads home to his wife, Brittany, and four year old, Paisley. Additionally, he is expecting a son in July. Decompressing from the day by catching up with his family, watching sports, gaming, and indulging in gummy bears, Groff is already getting ready and set for the next day.

“My athletes mean everything to me. If it were not for them, my job would not be as meaningful, fun, or rewarding. I love it when I can incorporate them into aspects of my life. They are my athletes at the end of the day, but I love them like family,’’ said Groff.

THE WATCHDOG • Copyright 2020 • FLEX WordPress Theme by SNO • Log in