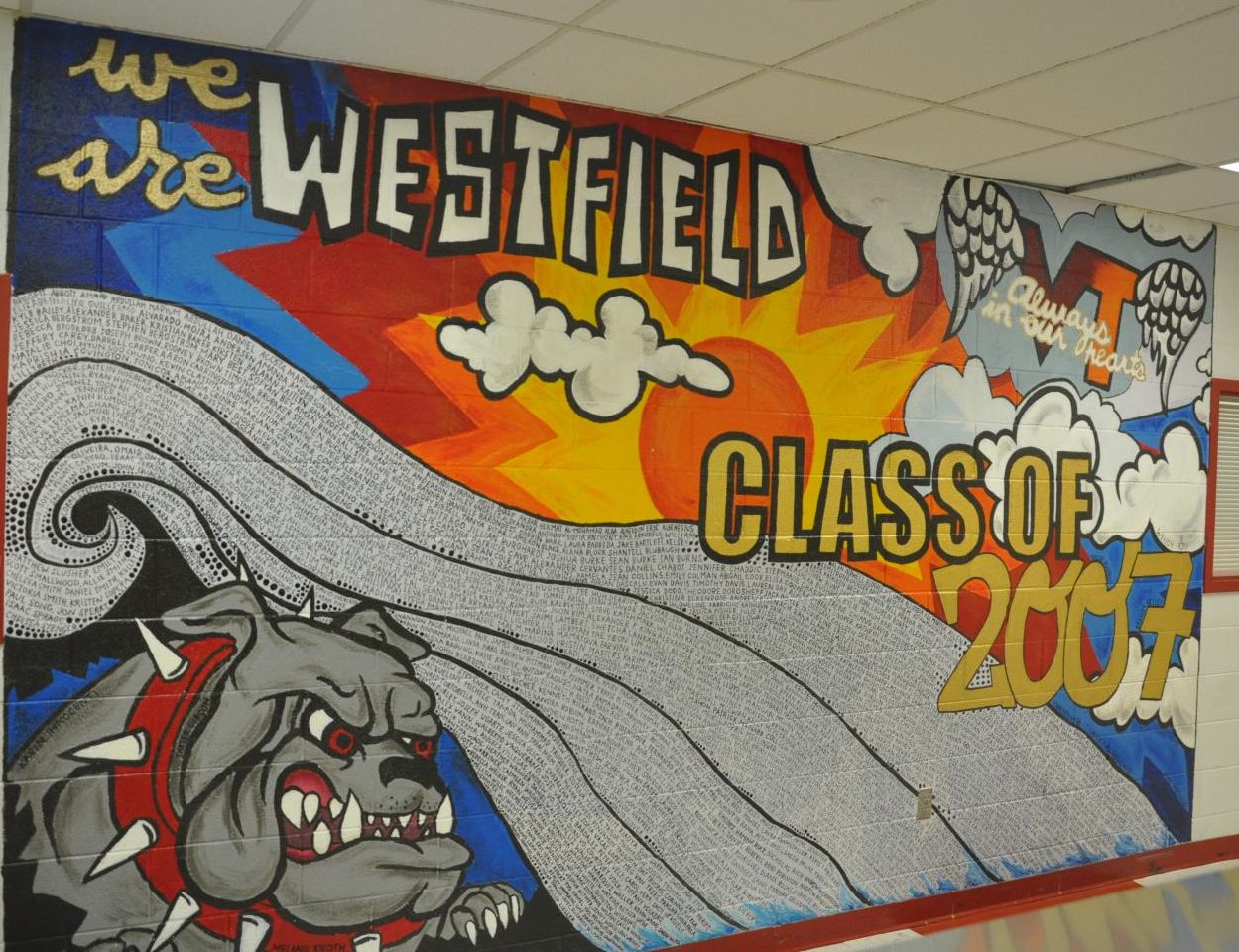 The Class of 2007s mural, displayed facing A Locker Bay.

In A Hallway, on the wall of Subschool 1, lies the Class of 2007’s mural. A bright and engaging painting, the work features the background of a sun and clouds, a fierce looking bulldog, a gray wave containing the names of all the members of that class, a memorial section dedicated to the Virginia Tech massacre, and, displayed at the very top, the powerful phrase “We Are Westfield,” a slogan that originated during that very school year.

The academic year of 2006-2007 was packed with memorable events, including new faculty, changes in school workings, and successful extracurriculars, but also contained one of the darkest times in school history: the Virginia Tech shooting, a tragedy deeply ingrained in Westfield.

Late 2006 and 2007 was also an important time within the country and worldwide. Politically, Nancy Pelosi became the first woman Speaker of the House, and among the immense global conflicts was the Darfur massacre in Sudan; for this genocide in particular, Westfield students and clubs helped raise funds to aid the victimized groups. In the ever growing world of technology, in early 2007, the iPhone was introduced, a phenomenon that would launch Apple into unprecedented global success. Regarding pop culture, the final Harry Potter book was published – as well as the fifth movie, Spider-Man 3 was released, and the most popular TV shows were Grey’s Anatomy and Crime Scene Investigation (CSI). Additionally, the biggest artists of the year were Beyoncé and Ludacris.

This school year was also significant, as changes to the schedule and procedures were made. One of the most prominent changes was the adoption of C Days, a day after A and B days in which students visited all of their classes for a shorter amount of time.

As well as that, 2006 was the first year that the school transitioned to online payments for lunch, using the website mylunchmoney.com, now known as MySchoolBucks. Due to this new program and an increased variety of foods offered in the lunch lines, to many students’ dismay and disapproval, prices also went up by $1 or more.

The school also experienced continued success in its extracurriculars. The school newspaper, the Watchdog, received top honors from the Scholastic Newspaper Critiques and the Quill and Scroll International Honor Society for High School Journalists; the publication earned an astonishing 930 out of 1000 points, competing against a number of schools around the country. Similarly, the yearbook, The Guardian, received the NSPA All American Award, and the staff decided to print the Guardian’s first yearbook in color that year, due to its theme, titled Bold, which featured many striking colors, many of which can be seen in the vivid background of the A Hall mural.

Furthermore, Westfield sports also enjoyed much success during the school year of 2006-2007. In the fall, Varsity Football had an almost undefeated season, winning districts for the third time in five years, and only falling short in regionals. Similarly, the boys’ Varsity Volleyball team dominated, going 12-0 and winning their third consecutive district championship. Additionally, Varsity Field Hockey took home the regional title, the only sport to do so that year. In the spring, Boys Soccer experienced success when they won districts.

However, on April 16, 2007, a senseless tragedy rocked the school, state, and country. That day, 2003 Westfield graduate Seung-Hui Cho opened fire on students and faculty at Virginia Tech, taking 32 victims and leaving 17 more injured, eventually ending his own life. Of the 33 lives lost, two were also Westfield graduates: Erin Peterson and Reema Samaha.

In the wake of the shooting, a nationwide debate about gun laws erupted. At the head of the fight for stricter gun laws and heavier regulations was then-Virginia governor Tim Kaine. Kaine condemned the state laws for allowing Cho, who was ruled by court as being adjudicated and mentally unstable, to legally purchase two firearms when federal law forbade him from acquiring them. Because of this, Kaine issued an executive order intended to close the gap between state and federal law, as well as sponsored a bill mandating background checks for private gun sales, which was shot down in the Senate. However, since then, most states have tightened laws requiring reporting of mental health and background check information to the NCIS.

And while the effects of the Virginia Tech shooting was felt around the country, one place where it hit the hardest was Westfield. The 2007 Guardian reported that the day after the shooting, the school was consumed in a sea of maroon and orange. Morale hit an all time low, and news stations were quick to set up outside the school and don it “a breeding ground for killers.”

“I remember thinking there’s no way, as large of a school we are, that we’re not affected, only to find out the next day that three people, including the shooter, were former Westfield grads,” recalled Ryan Chapman, social studies teacher, “And when that all came out, the next day, this place was somber. It was quiet. Everyone was in this collective state of shock. It took several weeks for things to even slowly feel like it was a normal school day.”

Two days later, a schoolwide “family meeting” was arranged, and students and faculty gathered in the stadium. The 40 minute assembly paid tribute to both Peterson and Samaha, included previous Westfield principals who spoke on the school’s culture of excellence, and featured a release of butterflies across the stadium. Finally, then-SGA president Beth Seger recited Professor Nikki Giovanni’s Virginia Tech poem, replacing “We Are Virginia Tech” with “We Are Westfield.”

Following that day and that speech, We are Westfield has been an unofficial slogan for the school, reminding the community of its strengths and the unity and spirit that the school carries. As a constant reminder, it stands gracefully on the wall of Subschool 1, proudly painted on the 2007 mural.

Erin Peterson, Class of 2006, was an active member of the Westfield community. Peterson played on the varsity basketball team for three years, donning the number 45. In the wake of her passing, the program decided to retire her number; her jersey still hangs in the gym today. She was also on the newspaper staff and was an editor of the Watchdog. Additionally, she was a member of French Honor Society and the Quill and Scroll Honor Society for three years. Peterson is remembered as a bright girl who poured her heart into everything she did, and made sure that her friends were okay. Many describe her as a person who was looked to for leadership, support, and most of all, friendship.

An annual scholarship is administered at the school in her honor, given out to an athlete who exhibits the same qualities that Peterson did. As well, the girls basketball program gives out the Erin Peterson Award to one player in the Bulldog Bash tournament every year.

Reema Samaha, Class of 2006, was an extremely talented performer at the school. She appeared in many theatre mainstages, and was honored for her excellent dancing abilities outside of school. She was also very involved in the Westfield community through the clubs she was in, including the Phillip Zimbardo club, Improv Troupe, National Honor Society, Science Honor Society, Brain Club, French Honor Society, and the Interact Club. Samaha is remembered for her loving spirit, fierce dedication, extreme optimism, easy going nature, and comedic genius that made everyone she spoke to laugh.

Shortly after the shooting, the Westfield Theatre Booster Club presented a cabaret in her honor, using the admission fees to create the Reema Samaha scholarship, awarded to a student each year who carries Samaha’s spirit with them.