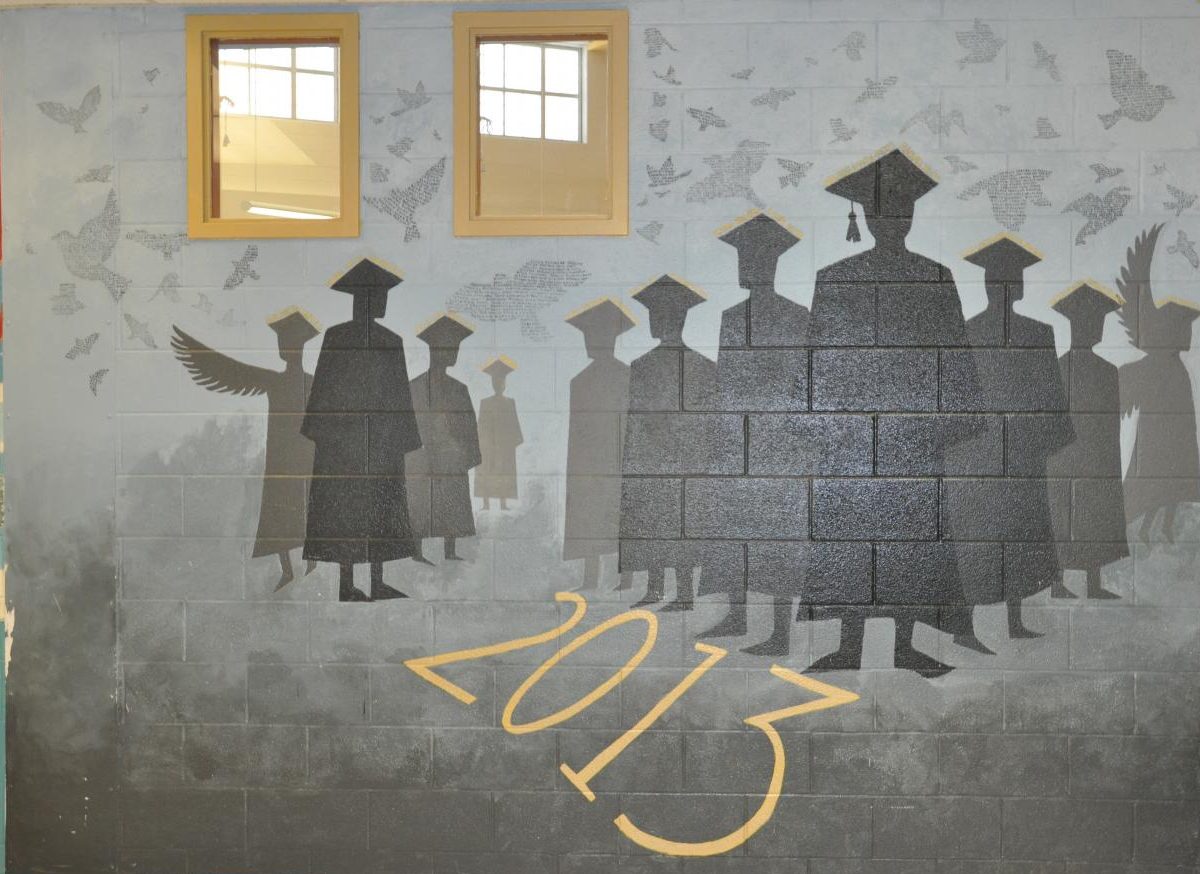 The Class of 2013 mural, displayed on the wall facing the cafeteria. (Photo courtesy of Dana Elobaid)

The Class of 2013 mural, displayed on the wall facing the cafeteria.

2013: A ROLLERCOASTER OF UPS AND DOWNS

Located at the intersection of C hall and the main corridor, the Class of 2013 mural is painted only in  three colors: black, grey and gold– the colors of Westfield High School. The mural features eleven silhouettes in graduation garb. Two of them have wings, conveying a hopeful vision: upon departing, the graduates will take the knowledge they gained in high school  and soar to new heights.

In 2012-13, many programs within the school did, in fact, rise to new levels. Sports teams did well compared to the previous year, though not at the high caliber for which Westfield has become known. Only field hockey reached the state championship, and a few people won states for individual events. The school added more honors classes and hired a new theater director who would propel drama productions to notable achievement. The nation as a whole experienced some significant upheavals.

The fall sports season of 2012 was one to remember at Westfield. Gender barriers were broken when the cheerleading team welcomed Colvin “Puma” Milkovic, and the football team introduced Nadia Pardo as their kicker. Also, the golf team broke a two year losing streak with a win over Herndon. The school was starting to make a comeback into the spotlight and even the marching band qualified to march in the 2014 Rose Bowl Parade in California while being only the third school from Virginia to do so.

In the Watchdog issue from October 2012, senior Erin Schulte said, “It was overwhelming at first and really just unbelievable and really exciting. It was nice to know that all of our hard work paid off.”

At the end of the winter sports season, Nathan Kiley came set at the starting line. As the starting signal went off, Kiley sprung into a sprint and set a personal record 800 meter dash time to win the state tournament in track. Closing out the year with mostly winning records, the sports programs at Westfield were beginning to climb back into the picture as a powerhouse.

With a new program creator in Susan Pike, the theatre department had a strong year. Sending senior Mitchell Buckley to the 64th Annual Southeastern Conference to perform in the state’s performances for theatre, the department was proud of their accomplishments as it wished their seniors the best of luck in the future.

On the national scene, Barack Obama was re-elected as president over Republican Mitt Romney in November. Mid-December of that year brought news of a devastating tragedy in Connecticut, where more than 20 children perished  after a deranged gunman burst into Sandy Hook Elementary School. That month also brought a wave of more lighthearted craze over the Mayan prediction that the world would end on December 21. In the spring, the nation suffered another heart wrenching blow with a deadly terrorist attack on the Boston Marathon.  In its wake, Americans became scared and often suspicious of other people’s activities; everyone’s private lives were no longer so private. While the sun continued to rise, it was a year whose pains would not soon heal.

Overall, the year was stressful indeed for the citizens of the United States, but here at Westfield, the students were doing fine enough. Between the improvement in sports and the success of large clubs, the graduating class of 2012-13 was lucky to have such a successful last year of high school before soaring into the future.

In the final issue of the Watchdog, senior Chungman Kim stated, “Graduating is one of the best feelings in the world. At the same time, I’m sad because this part of my life is over.”