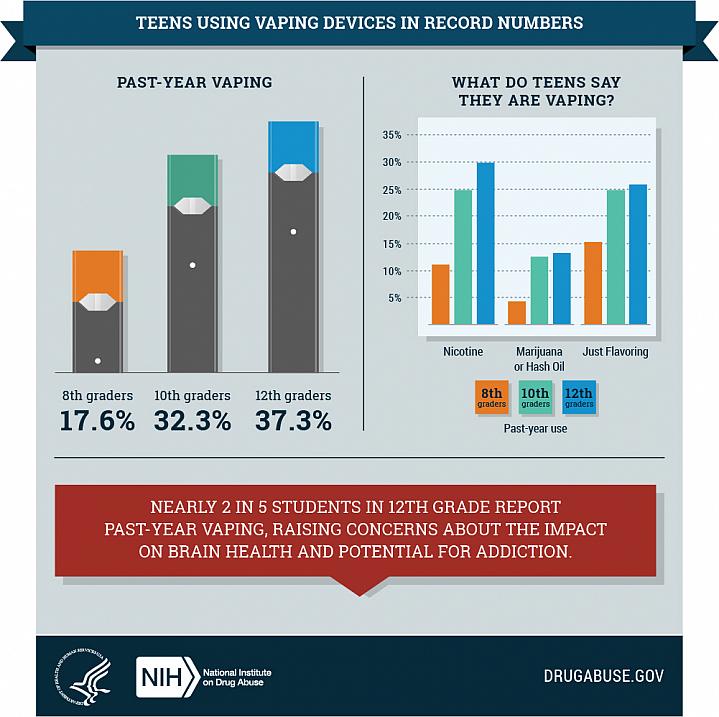 A sign on the office door of Robert Battani, Safety and Security Specialist, reads, “Vaping will kill you. Stop now.”

The national vaping epidemic is increasing significantly, especially in high school, and many underage students are becoming addicted to vape devices. At Westfield, students have witnessed their peers vaping in bathrooms as well as selling vape juice, THC pens, and other vaping products.

Vaping in Fairfax County Public Schools (FCPS) has been a huge problem. Here at Westfield, the school security team reports that vaping is taking up more time than any other discipline issues, and students are facing the consequences.

According to Kevin Mahan, Safety and Security Specialist, “Consequences of using these devices include complications with Fairfax County Police… [These include] suspension, and an educational seminar that presents the dangers of vaping.” Mahan added that repeat infractions can result in expulsion.

Mahan also stated that “the Fairfax County police do not deal with vaping on school grounds,” and that the schools job in the situation is to discipline the student.

Across FCPS, there is likewise a persistent problem. The most vaping takes place in middle school and high school. To combat the problem at Chantilly High School, a student started a club whose mission is to raise awareness about the dangers of vaping.

In recent months, the national vaping crisis has become a top story in the news. Approximately twenty percent of high schoolers have used vape devices. Some 800 people have been hospitalized due to vaping induced illness, and about ten have died. The issue has prompted legislation across the United States; for example, the Food and Drug Administration (FDA) has banned sales to minors, mandated e-cigarettes to be regulated as tobacco products, and has banned e-cigarettes from five states, including Massachusetts, Michigan, New York, Rhode Island, and California. Virginia is a state that allows e-cigarettes, but local areas are allowed to pass laws to ban e-cigs from that area.

There has been a recent problem that has involved black market vape products,which often contain deadly chemicals. The vaping related deaths have all been tied to black market vape products. The juice produced by the black market does not carry a disclaimer, and there is no warning on the bottle about nicotine. It also doesn’t have a warning tab that says that there are other dangerous chemicals inside the juice. The majority of the 800 that have been hospitalized were using black market or illegal vaping devices/juice. In a scientific study on illegal vapes, thirteen out of the fifteen tested contained the potentially deadly ingredient Vitamin E. Also, ten out of the fifteen tested contained dangerous pesticides. Illegal vapes can easily kill a person, or can hospitalize the user.

Around Westfield there are signs discouraging vaping. Some students are taking matters into their own hands, and are posting signs around the school themselves. “No vaping allowed!” reads a handwritten sign in a bathroom. The sign includes a drawing of THC pens cross-boned with a skull.