WHAT IS JUST: OUR FAITH IS NOT A BURDEN 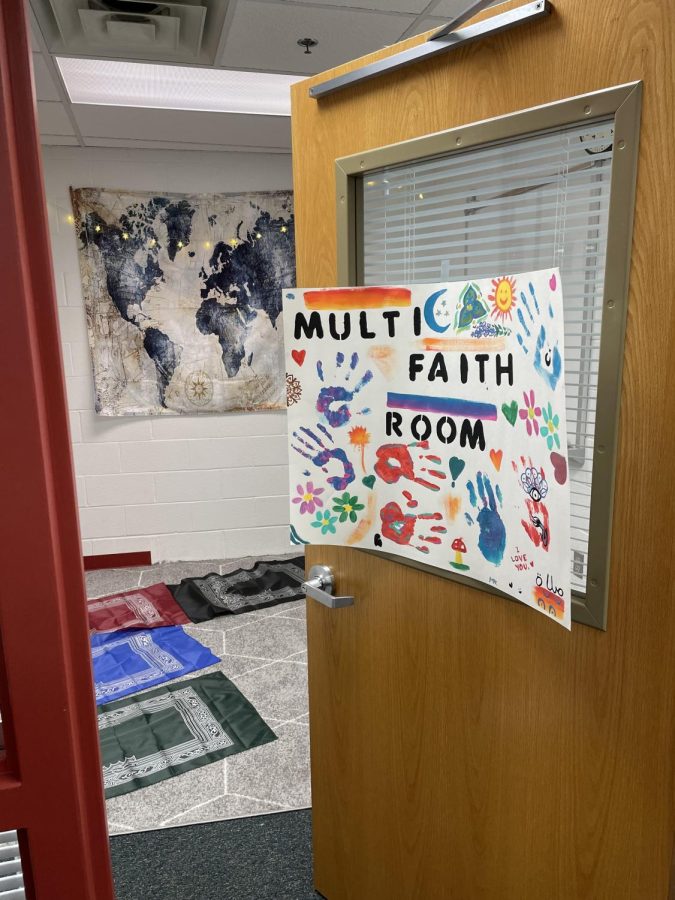 The Multi-Faith room located in the back of the library.

I am exhausted from having to answer to people just to simply practice my religion. I am exhausted from carrying the burden of having to fight for every freedom that we deserve in the first place. I know for certain my sentiments are commonly felt among the dozens of students who attended the walkout on April 14, regarding the restrictions to the Multifaith Prayer Room located in the library.

When the idea of the prayer room was first introduced at the beginning of the school year, Westfield High School’s new principal, Antonio DiBari was pleased to support the first steps of setting it up. DiBari was glad to start of his first year as principal with a sense of inclusivity and change. When asked what his aspirations were for the Multifaith Room in the future, DiBari responded, “I would love for us to just keep going forward and for the space to be available for when everyone needs it.”

With the suggestions of various students at Westfield who anticipated utilizing the Multifaith Room, I was able to organize a wishlist for items on Amazon and a Google slides presentation regarding the plan for the room. As DiBari and I worked together, we were able to narrow down the setup of the room to establish a perfectly poised format, combining multiple visions for the special space.

When the Multifaith Room was first fully established in January, not many students came to pray there regularly, and the students who did come were all Muslim students performing obligatory daily prayers. Many including myself were concerned that the room would not be available for us later in the year, especially since the windows for prayer times change along with the seasons. There were also pre-established regulations coming from librarians regarding the availability of the room during classes. The librarians had informed me and other students that the Multifaith Room could only be used for prayer during lunchtime, and that county policy prohibited students to pray during classroom instruction time.

As springtime and the holy month of Ramadan approached, Muslim students found themselves needing to pray at the beginning of seventh and eighth periods. The prayer times for Muslims are in line with the position of the sun and occur during a certain window of time, However, the librarians would refuse the requests of students to utilize the prayer space at the beginning of class periods despite students informing them that the prayers were mandatory and crucial to our religious exercise.

As more students needed to utilize the prayer room, especially during Ramadan, more complaints emerged as students were continuing to be denied a place to pray. Many were confused on why the school gave us a prayer room if we were not even allowed to use it.

On April 14, students were tired of feeling ignored and as if their concerns were being swept under the rug. So, around sixty students joined together to participate in a peaceful walkout at the beginning of the day before classes. Dozens of students were able to communicate their valid and continuing concerns to the principal in unity. Students coming into the building stared in curiosity as their peers stood in solidarity fighting for their religious freedom. As we returned to the building to attend classes, many students and even teachers ambushed us with questions. I was able to explain to various teachers the objective of our walkout and many were proud to hear that Muslim students were standing up for themselves.

The principal pledged to the students who walked out that their worries would be recognized and that the unnecessary restrictions in the library would be lifted.

While reflecting on the actions taken by students during the walkout, students Iman Ahmed, 11, and Sara Keefe, 12, questioned the events with the same curiosities: “Would there be a similar reaction to the usage of the prayer room during classes if the students asking were members of a different faith?” Many members of the Westfield community had the same inquiries, and their emotions are valid. They should not have to debate their guaranteed, basic religious freedoms.

For every person that is able to practice their faith freely and independent of exterior control, there is an unbending and persistent community, filled with love for their people. Every religious minority has to battle the plights of ignorance and discrimination almost every day. They have to fight for rights that they should already be guaranteed in the first place. For the longest time, school administrators, students, school board members, and policymakers have clashed on their beliefs and opinions regarding religious liberties in the classroom and in school-related activities.

Every religion and faith is different in its rituals and prayers. Some have daily obligatory prayers while some can only perform prayers in certain areas like mosques, churches, and synagogues. Depending on each community and individual, there is a different perspective and all have various priorities in their beliefs. Muslims however are obligated to perform five daily prayers at certain times throughout the day. While facing towards the holy city of Mecca, Muslims begin their prayers with a heartfelt intention along with complete focus and attention. In performing the ritual prayer and reciting verses from the holy book of Islam, the Quran, the area, one’s body, and clothing must all be clean and free of impurities.

Regarding the area towards which they pray, Mecca is a holy city where Muslims go to perform the pilgrimage. The Kaaba is located in Mecca, and it is the center of the city, and more importantly where Muslim turn to pray. This symbol of humanity from a young age has transpired so much love in the hearts of individuals including myself, especially for advocating inclusion. At the Kaaba, anyone can come to perform religious prayers. However, when I find myself having to perform my prayers at school, there doesn’t seem to be a perfect space where I can feel safe praying.

Daniela Lagos-Ochoa, 12, shared her perspective after discovering the news of the new Multifaith Room, “I thought before that there was already an established space for people to pray and practice their religion. It just feels like an obvious given right that we shouldn’t really have to advocate for.” Many students have had inputs and emotions along the same lines. Some have been completely aware of the fact that there is no designated space for them to pray while others just assumed there was since it is that pivotal to individuals and community and seems too ignorant to not have this opportunity, especially in this day and age.

Members of the Westfield staff were also pleased and shocked to learn of the ongoing endeavors to establish a special prayer space for students.

There has been controversy in the past in various schools and athletic sports dealing with religion vs. state. People who participate in religious prayers in schools say that the most controversial subject in schools is prayer in public areas. Americans continue to be conflicted over the position of religion in our schools. Moreover, some people believe that including religion in schools is an infringement on the first amendment of the Constitution. While others believe it is the most important thing to them in the stresses and struggles of their lives.

So, after praying in a small corner of the library, myself and many members of the Muslim Student Association knew it was time to make some kind of an alteration, not just for other Muslim students, but for every student at Westfield High School who needs a space just to feel included and seen regarding their faiths. The Multifaith Room at Westfield is an inquiry many students had. Through collecting concerns and compiling ideas, I was able to get support from Principal DiBari to make this happen. Through a Google Slides presentation and an Amazon wishlist, the Multifaith Center at Westfield will be transformed from an empty room in the library to a place where, of course, students can come to pray, or even just find serenity. With a few string lights and hope for coexistence in our communities, I envision the Westfield Multifaith Center will assure every student who has felt unseen, and hopefully, we can call it a mecca of acceptance.