THE MAGIC BEHIND THE AMAZING MADRIGALS 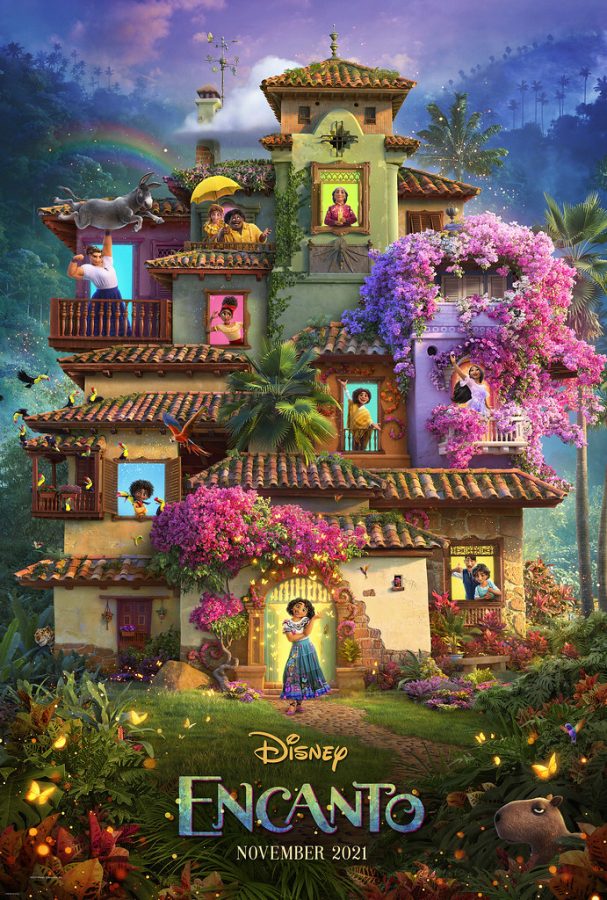 The main poster for the movie Encanto.

The room is dark, except for the bright light that was shining down on Antonio. The entire town is there, parting the path he would have to walk like the red sea. The normal walk up the stairs seems more ominous than usual.

Mirabel can clearly see the nerves Antonio, her cousin, is suffering from. She understood from back when she had to do the walk herself. The feeling of the entire town’s eyes on her was a feeling she would never forget.

She watches as Antonio looks towards her, his eyes pleading for her help. He reaches his arm out to her. Mirabel wants, more than anything, to help him, but she knew how it would look. Abuela would never allow it, and would accuse her of attempting to steal the spotlight.

“I can’t.” Mirabel mouths for only Antonio’s eyes.

“I need you.” Antonio pleads.

That is just one of the many heart-wrenching scenes from Disney’s 60th animated film, Encanto. The movie stars actors like Stephanie Beatriz, John Leguizamo, and María Botero; with original music composed by Lin-Manuel Miranda and Germaine Franco. The film’s United States release was November 24, 2021. The film was targeted toward younger audiences, since it was rated PG. Though it was targeted toward younger audiences, older kids and adults found comfort within the film.

Encanto explores the inner workings of families, and the pressures that go into wanting to prove oneself. Though the film focuses more on a family with supernatural powers, the roles of the family members are universal.

The movie takes place in early 1900s Columbia. This setting allows for a rich color palette and diversity. Columbia during the 1900s was filled with bright colors that have been placed into the film, making this Disney’s most colorful film. The diversity is due to the mixing of racial classes during the time of Spanish colonization of the area. To be able to see Disney add in a bit of history to their film proved to be satisfactory for the company.

Encanto highlights the life of Mirabel Madrigal; a young girl born into a family with supernatural powers. The night of Mirabel’s youngest cousins, Antonio, gift ceremony, the magic starts to fade. Mirabel decides to take on the mystery of what’s hurting the magic, and how it can be stopped. Throughout the hurdles of trying to find out what’s going on, Mirabel starts to notice negative things about her family and their customs.

Many of the negative factors about Mirabel’s family is what made this movie so loveable. For example, Mirabel has been trying to gain the attention of her Abuela. Since Mirabel was born without a power, her Abuela has seemed to put her less than the other members of the family. Mirabel then finds that she’s not the only one who feels as if Abuela sees her as less than; she realizes that it’s a struggle among her entire family.

There has been a social norm for centuries, and it forces people to attempt to fit into it. Not only is this social norm within our basic societies, it’s also incorporated into our families and schools. People feel as if they have to be perfect constantly, and they use other people as examples of what ‘perfect’ is. Yet these people they use as examples, are just trying to be ‘perfect’ as well. Encanto highlights this idea and makes it easier for the younger audience to grasp the concept of.

The film also highlights the idea of generational trauma, and how it may go unnoticed within a family structure. Generational trauma can be described as many different things, especially considering the situation it’s used in. The Office for Institutional Equity describes generational trauma as the transmission of the oppressive or traumatic effects of a historical event.

Abuela has taken the traumatic experience of losing her husband and home, and has passed it down to her children and grandchildren. This fear within her has, not only, spoiled her relationship with the rest of the family but has also allowed her to place unrealistic expectations onto the family. These expectations are what makes Mirabel feel as if she has to prove herself to Abuela.

This idea of generational trauma among family members is extremely common, especially among minority groups. Because of the racism that minority groups usually face, these feelings of animosity and fear are passed down to the younger generation. A great example would be the ‘talk’ that African-American parents have to have with their children. This is something that has become a common occurrence in families, so they are labeled as normal. Yet, no one should have to talk to their child about how to protect themselves from people who are trying to protect them.

Though the movie is able to paint these issues in a beautiful way, there are still some aspects about the story telling that could have been better. The movie’s ending moved a little too fast for comfort. In the movie, when they’re building the house from scratch, we get a glimpse of the healing process the family is going through. Personally, I think that they should have shown the healing process a little more. The question everyone wanted answered was how did the family come together? Disney did not provide a good enough explanation of it.

Overall, Encanto is a good step in the right direction for Disney. This movie not only gave the audience diverse representation, but it also highlighted hard to understand issues in an understandable way. The film also highlighted the quest of a female main character who didn’t need a man to help her.

If this movie represents the future of not only Disney but the entertainment industry as a whole; then we are moving in the right direction.