THE DONALD LEGACY: A SORROWFUL GOODBYE TO OUR PRESIDENT | THE IRONIST 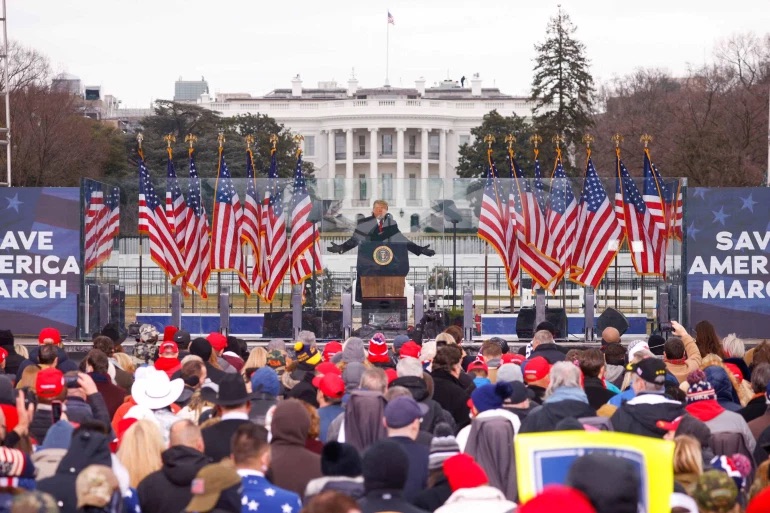 Seen above is our incredible leader showing his appreciation for the heroes that tried to save this amazing country from a sleepy old guy who didn't even win! Photo Courtesy of Aljazeera.

The Ironist presents an argument using that mighty tool known as verbal irony, or sarcasm. Irony has long served as both a weapon and a balm for those living in tough, turbulent times like our own.

Well, America, you did it. You went to the polls or voted from home (which is very fraudulent) and voted out God’s gift to the world. Look at what you gave up: a man who was able to fix all the struggles the awful Obama administration had brought into this great nation. You have given up a man who fought night and day for the values that America was founded on. Who was the man that never gave up when the hippies tried to bring in their environmental plans? Who was the man that kept children in a safe space while their parents were away from them? Who was the man that never took the negative press covfefe to heart? Donald Trump was the answer to all of these questions, and he was able to do a lot more for this nation, too. America, nay, the global community will mourn the loss of the greatest president America has had. Sleepy Joe might have “won” this election, but the era of DJT is not over!

When reflecting upon the legacy of a past president, the general public tends to remember the high points of his presidency. Luckily for us, the Donald’s presidency was only full of high points! His greatest achievement was perhaps his handling of the glorified cold. If you ask any well informed American, he or she will tell you that there is no such thing as a coronavirus. The almost 20 million Americans who became “infected” with this cold want to leech off the government for free stimulus money. While the Donald did, sadly, contract the virus, he whooped it and showed it who the boss was! The almost 300,000 people who have “died” from the virus were one of three things: liars trying to get life insurance money, weaklings, or losers already sick with something else. Luckily The Don has been listening to the only man he trusts so that he can have the wisdom to guide the nation through this travesty, himself. But, sadly, you just had to go and throw him away. Now, whom do we have to replace him? Some old white guy? You messed up, America, and now we will all suffer until The Don can win again in 2024!

These next two achievements of DJT’s legacy should not come as a shock, but what he has done for both the hoax that is climate change and the border situation could not have been done by any other man. What can be said about climate change that I haven’t already said before? It is nothing more than a hoax created by greedy scientists and hippies trying to get the president to do their bidding. DJT was not the man they wanted to mess with, however. DJT has shown time and time again that he is here for the average Joe. Clean energy is for hippies! So what if the climate is changing? We won’t be around when it happens, and it changes all the time! We’re here for a good time, not a long time.

The border debacle has already been covered, but it is always important to reflect on the marvelous job the president has done down there. The liberal media always likes to point at Trump for being the reason kids are separated from their parents. This happens all the time! What’s next, CNN? Does Walmart also contribute to the separation of families when a kid gets lost? Recent studies show that 100% of kids have been lost before. Kids aren’t the brightest. It is unfair to pin this on a man that could not have done anything against this! Guess the leftist media will be upset they lost their “scapegoat”!

By now you’re probably wondering how an exemplary leader could have been voted out of office. Well, he wasn’t! That is what the dirty Democrats want you to believe. You would have to be crazy to vote against Trump! The Don has given so much proof of election fraud. It is too much information for me to handle, so it won’t be mentioned. But, you have to trust him. There was serious fraud during this election cycle. Voting from the comfort of your home is not how the founding fathers envisioned it! They would have wanted you to wait outside of a crowded building with the possibility of getting this fake disease. This election was horribly rigged against The Don, and everyone knows this! The dirty Democrats might have gotten away with it this time, but they won’t in 2024. America will wait for you, Donald.

America is not the only nation that will miss The Don. While nations around the world have rushed to congratulate Sleepy Joe, there are a few great nations that refuse to accept him. Hippie states like Germany, Canada, the United Kingdom, and France have all rushed to worship the (FAKE) president-elect. Mexico, Brazil, and Russia have all held strong against congratulating the false prophet the left has propped up. This is very surprising that only a handful of nations have not come in support of Trump. His foreign relations can only be matched by Nixon and Reagan, two of America’s gems. Our foreign relations were so good other nations wish they could have been America. When was the last time a president spoke to Kim Jong Un? Never. It was never attempted before, but, thanks to the genius of The Don, it was done. Our relations with the world have never been better, so it is sickening to hear that everyone was so quick to flock to Sleepy Joe. Our glorious president will forgive them when he triumphantly returns to the spotlight in 2024. Until then, he will be missed by the global community.

Finally, before saying goodbye to The Don until his presidency in 2024, it is important to mention his very effective communication style. DJT is perhaps the greatest speaker to have ever walked this great planet, and his tweets reflect that. Who can forget the time he told Kim Jong Un that his nuclear button works better than the North Korean dictator? It is safe to say that Kim probably sleeps with one eye open after that tweet. Even before he was president, Donald John Trump was helping everyday Americans. In 2012, he gave free relationship advice to Robert Pattinson. So, not only is he a playboy billionaire, but he is also a great leader that gives out great advice. When was the last time Sleepy Joe did anything like that? America, this is worse than the negative press covfefe. Sleepy Joe is a boring, boring man. Listening to his speeches makes everyone want to fall asleep. DJT, on the other hand, is a man that I could listen to for hours!

After four glorious years, the time has sadly come to say goodbye. This is the temporary end of an era marked by American greatness. As we look back on his great legacy, it might seem hard to hold back the tears as we let go of him. His accomplishments are far beyond what we can comprehend now. Perhaps in the future, the dirty Democrats will finally acknowledge the greatness of our 45th president. Sleepy Joe has quite the load to carry, and no one will be surprised when he fails miserably. No man has ever cared more for America than Donald. Joe will believe anything scientists tell him, loosen up border security, ruin our foreign relations, and be an overall weakling. We need a man to do this job, but he was not good enough for America. Goodbye, Donald. Your legacy will live on, and America will mourn your loss for four dark years.

Addendum: As of January 18, I am beyond proud to report that some American heroes have tried to take matters into their own hands. Our glorious leader even expressed how much he loved them. These American heroes did their best to save us, but they are now being persecuted for simply expressing their own beliefs. SAD!