DONALD TRUMP: A LEADER SENT FROM ABOVE | THE IRONIST 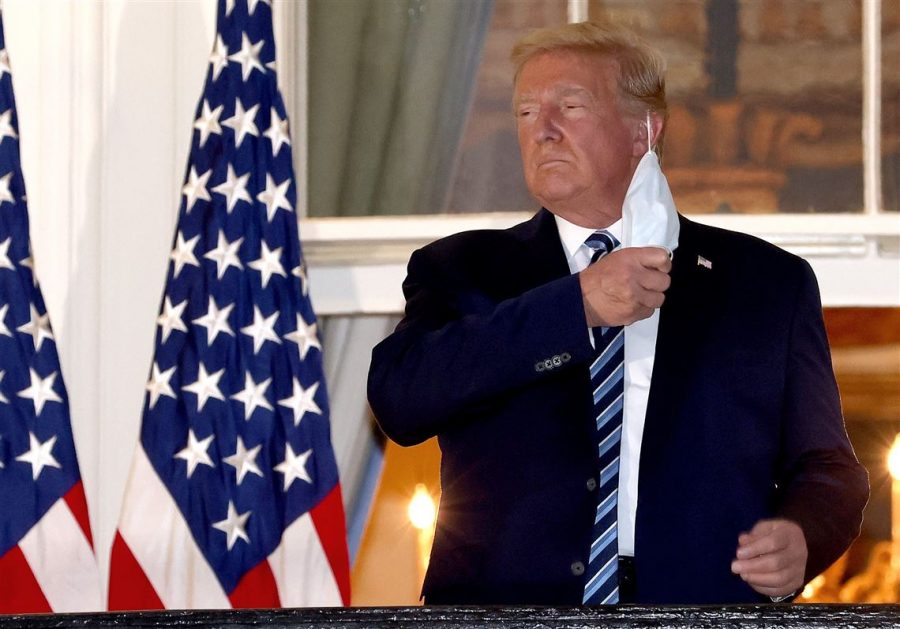 President Trump removing his mask after beating the Coronavirus, assuring Americans that the overplayed plague is no real threat!

The Ironist presents an argument using that mighty tool known as verbal irony, or sarcasm. Irony has long served as an expression of protest and disdain– both a weapon and a balm for those living in tough, turbulent times like our own.

The election is fast approaching, and now is the time to vote for a strong man who vows to protect our nation from falling into the hands of villainy, a man who has proven during these last few months that America is his one true love. That man is our current president, Donald John Trump. His response to this fake virus has been outstanding and far better than what any Democrat could have done. Quite frankly, everything our leader has done has been beyond outstanding. Not only has he done a tremendously good job at handling the virus, but he has also been helpful controlling our border crisis and  squashing the myth of climate change.

First, we need to address this nonsensical and bogus “virus” that has been mentioned non-stop in the liberal media. Johns Hopkins University, a very liberal school in an urban city, has been misleading the public with the deaths here in this great nation. They currently report roughly 226,000 deaths here in the US, but any good patriot with a quarter of their brain still functioning knows that the number is just a farce. How could that many people die from a simple cold? It seems almost illogical to think that a person could fall victim to a little cough. If anything, it’s probably people pretending to die for the insurance money. It seems almost too convenient that 210,000 Americans died of this so-called virus after the unemployment rate rose. This abuse of our life insurance policies will not stand in America! Luckily we have our great myth-buster, Donald Trump. Now that he has made a full recovery from the virus, he has yet again proven to the Democrats that this virus is nothing to be afraid of!

Our 45th president has always shown his love and appreciation for the immigrant community. If he didn’t like immigrants, then why would he hire them to construct and eventually work at Trump Tower for minuscule wages? He is doing them a favor by hiring them to work for him! Trump has even gone on record to say that he loves Mexicans almost as much as he loves chips and salsa, often praising Mexico for discovering the dish 74 years ago. Would a man who loves Mexican culture as much as Donald keep a system that treats people almost like animals? No, he wouldn’t. It would be crazy to assume that. Let’s assume for a second that the liberal media is correct about the hundreds of family separations; kids lose their families at the store all the time! Why is this any different? Those border camps are practically one big candy shop! Sleepy Joe would show mercy to migrants while our president would show them who runs this country. That is the type of man we need to defend our values as a nation.

Finally, perhaps the greatest win for our nation came when Mr. Trump decided to show those liberal scientists who the top dog was. I am, of course, talking about how Trump boosted our amazing coal jobs and spat in the face of the climate change hoax. He practically gave the coal industry the breath of life it needed to rise above the ashes. Switching to tree hugger energy would just hurt the economy more, and that is the last thing we need. The radical left wants to spend trillions of dollars just so hippies feel safe in America. Our friend in the oval office won’t let the left get away with it. Instead of wasting the money on energy for the electric cars of leftists, we could use it where it matters: the amazing border wall. If Sleepy Joe wins in November, then he will switch the country to tree hugger energy. Then every city in America will be infested with tree huggers until, eventually, every American becomes a hippy – even your grandma! If every American becomes a wimpy, tree-hugging hippy, Russia will take us over, and we’ll have to call Putin our president. Thanks to Trump and his resistance to hippy energy, America will never be manipulated by Russia! The tree-huggers have recently gotten the support of many “scientists” to back both Sleepy Joe and their leftist propaganda. This sad attempt at swaying the vote away from our brave president who has stood up to them will not work, as the common man is much smarter than to fall into the traps of these so-called scientists!

This choice between a great American and the old, senile man somehow has many confused about who to vote for. The choice should seem very clear by now. Trump has proven that he is a compassionate man and a safe choice to defend America’s best interests. Not only is he American, but he is also a gift from above and the greatest president we have had since Warren G. Harding.