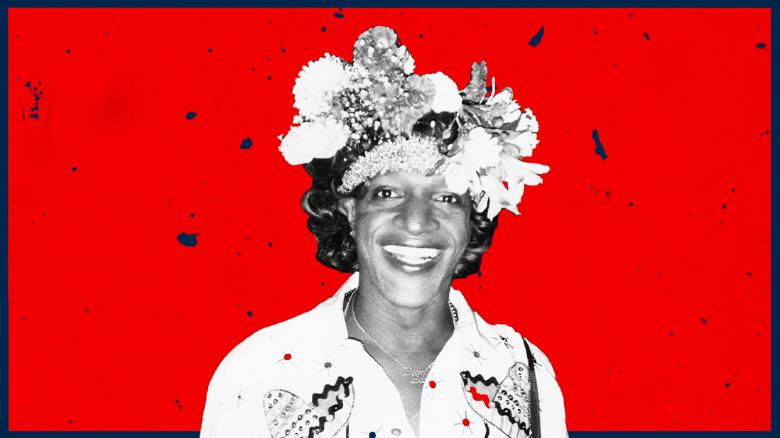 “When I think of Marsha P Johnson, I think of someone who are kids today, who are gay, know nothing about, which is a shame, really. Because she’s one of the reasons they are sitting in all of their liberated glory today. Marsha paid the price for who she was.”

In the magnificent and particularly bright month of June, with faces gleaming and tank-tops drenched with sweat, LGBTQ+ communities parade through every major city across the world to celebrate their queerness and individualism. These masses have a few things in common: an abundance of rainbow flags, bodies glimmering with glitter, and at the very center, white cisgender* gays.
*defined by Merriam-Webster as “of, relating to, or being a person whose gender identity corresponds with the sex the person had or was identified as having at birth.”
This is the unfair and ironic reality: LGBTQ+ individuals have the rights and freedoms that they do today due to the work of queer people of color in the late twentieth century, historical figures like black transwoman and activist Marsha P. Johnson, black lesbian and poet Audre Lorde, black gay and civil rights activist Bayard Rustin, and Latina transwoman and heroine Sylvia Rivera, and yet the faces of the gay community in the twenty-first century are one color, one gender, and one sexual orientation.

Statistically speaking, John Walker, a writer for Spinternews, found that in 2016 “out of 224 cover stars in total—including repeat appearances by several individuals—straight white cisgender men (40%) were better represented than queer people of color (9%).” To clarify, the magazines that the 224 cover stars were in had some to a large association with the LGBT+ community. In a chart provided with his article, Walker also includes the fact that the rest of the 35% of the cover stars were white LGBT+ people.

This is just regarding representation in the media.

According to the Human Rights Campaign, in a 2014 report, “34 percent of black transpeople live in extreme poverty compared to just 9 percent of non-transgender black people.” Furthermore, black transpeople’s mortality rate has increased exponentially since the last decade, most deaths as a result of police brutality. In a research conducted by the HRC in 2013-15, of the 53 transgender people killed in the three years, 86 percent were people of color (73 percent were black individuals and 11 percent Latino/a/x).

In terms of health, of the 37, 832 HIV diagnoses in 2018, the Center for Disease Control and Prevention found that 42 percent of these were of black Americans (note that 13% of America is black and that these numbers include both heterosexuals and LGBTQ+ people). Published in the U.S. National Library of Medicine National Institutes of Health, Kim M. Blankenship, Amy B. Smoyer, Sarah J. Bray, and Kristin Mattocks provide research regarding the lack of concern the U.S. government showed for its black communities compared to white communities during the HIV/AIDS epidemic that has resulted in the racial disparity of the diagnoses seen today.

“We focus in this paper on the structural and contextual sources of HIV/AIDS risk, and suggest that among the most important of these sources are drug policy and the corrections system. In particular, high rates of exposure to the corrections system (including incarceration, probation, and parole) spurred in large part by federal and state governments’ self-styled war on drugs in the United States, have disproportionately affected African Americans.”

Then the question becomes, “where do white gay men come into this conversation?” The answer is at the core.

Researcher Richard H. Gadsden for the LGBT Center puts it like this: “Considering the interplay of white colonialism and white supremacy within an ethnic groups’ history and current socialization necessitates itself when speaking about the lives of LGBTQ people of color. The current state of and nuances within these ethnic communities are inexplicably tied with their history with white colonialism and its residual imprints – past and present. The processes by which colonists used to assimilate ethnic groups towards Eurocentric standards persist today, and have forced however, with the influence of colonization and imposition of Eurocentric values, these freer gender roles have changed. There exists higher pressure now not to be open about sexuality on reservations and to relocate to more urban areas in order to be open.”

Adding to Gadsden’s ideas, the Eurocentric standards and values that have existed and still exist in society today are particularly emphasized in the LGBTQ+ community. These issues are furthered by, or, could be argued, rooted in, the sexual racism that is rampant in the gay community.

In a paper about this very topic, Mary Dianne Plummer discusses the not surprising results of sexual racism in the mental health of queer people of color: “Participants of color identified internalized sexual racism, decreased self-esteem, and psychological distress as the primary psychological consequences of sexual racism. The data analyses revealed quantitatively and qualitatively distinct racial pressures operating in the gay community in Seattle.”