UNIVERSAL HEALTHCARE: NOT FOR US 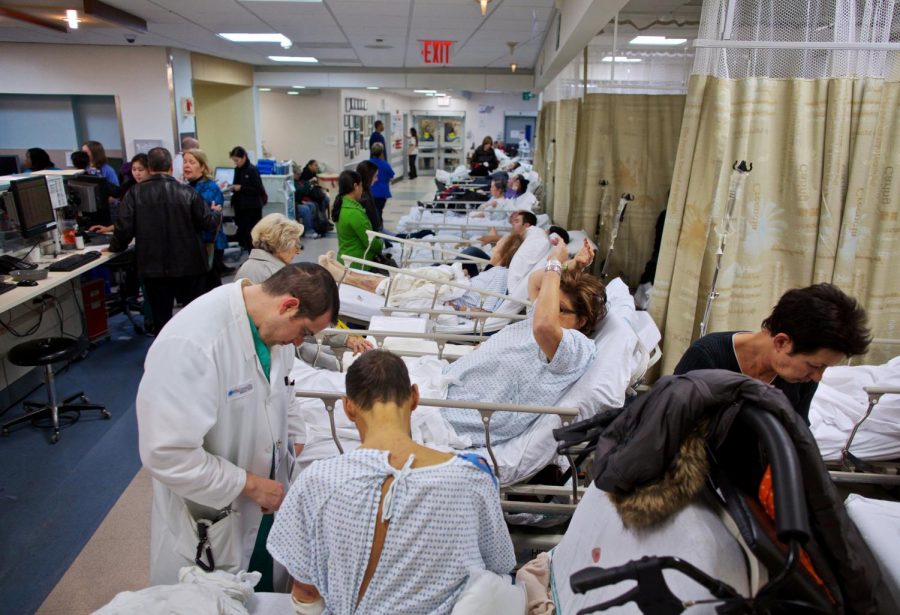 This overcrowded hospital in Ontario, Canada shows what American health care facilities could resemble if the United States were to implement an universal healthcare plan.

According to the World Health Organization, in multiple African countries that offer universal healthcare, approximately one-third to three-fourths of diseases are diagnosed accurately. Put another way, at least 25% of patients in those nations are misdiagnosed. These numbers are shocking, even more now with the current coronavirus pandemic.

Universal healthcare has been a long-debated subject among United States citizens and government leaders for years. Universal healthcare is a type of system that guarantees medical care to all citizens of a country or state by collecting funding mainly by tax revenue. The alternative is private insurance, funded by citizens and often, their employers. The constant back and forth of US presidents over national health care decisions has made the subject quite sensitive for many. Universal healthcare would not work as a part of the United States government because it would reduce quality care for patients, limit the accuracy of diagnosis, and change the government’s spending patterns.

Poor quality of care would be provided to patients if the U.S used universal healthcare. If all citizens have access to free medical care, prices would have to drop in prescription drugs and other important services such as physical and occupational therapy. This would ultimately lead to a quality decrease in patient care.

Ben Shapiro, a political commentator, lists the three possible qualities of health care: “…You can have affordability, universality, and quality.”

He goes on to speak about how a universal health care system can only have up to two of these qualities. If one would like healthcare to be affordable and universal, then he or she will ultimately miss out on the high quality of the care. If one would like health care to be universal, then the cost would rise for taxes and other sources of revenue in order to pay for that care.

Ángel Gurría, Secretary-General of the Organization for Economic Co-operation and Development, had this to say in an article published in the American Journal of Managed Care: “Without quality health services, universal health coverage will remain an empty promise.”.

A quote from Global Health shows that the poor quality of universal healthcare is the main cause of death within medical centers: “Poor-quality health care is a leading, preventable killer of people around the globe…”

Countries that partake in universal healthcare include Canada, Norway, and the Netherlands. Several sources show that waiting times in Norway are one of the biggest issues in the hospitals, inducing decreased quality.

Quality of universal health care would also decrease because of how many more patients would need to be catered to. Doctors will become overworked as the patient demand increases, leading to a drop in quality.

According to an Expa Health study in Canada, 59% of surveyed patients have to wait upwards of four weeks for care. The more patients that are waiting in a doctor’s office, the more rushed doctors are in order to meet with each and every patient. This will quickly lead to a decrease in the quality of care for patients, showing that national health care is not a good choice for the citizens of the United States.

Another reason for the inefficiency of universal healthcare is the inevitable stress of doctors, induced from a large increase in patients. The need for doctors and nurses to rush through patients will cause a limited accuracy of diagnosis for patients. As more and more patients flood into waiting rooms and emergency rooms, the extremely high prices of medicine will quickly have to drop in order for patients to be able to pay for their care. This drop in prices will cause fewer tests to be run, leading to less accurate forms of medical and genetic testing.

Many would say that now more than ever, the United States needs to put a universal healthcare plan into action. The recent outbreak of the coronavirus has left many people without healthcare scared and nervous about their health. The 27.5 million people left defenseless against this pandemic have no option of treatment if they get sick.

Though there are many hard-working and disabled citizens that do deserve healthcare, universal health care just would not work for America for one final reason. This reason is that governments’ spending patterns would have to change drastically. Not only that, but taxes on American citizens would largely increase because of the government’s need to pay for health care for everybody in America, causing intense backlash and public discontent.

For these reasons, universal health care is a dangerous decision for the United States. This change in legislation would influence many other areas and reduce the quality of the American government and the lives of US citizens. Not only would the quality of medical care drastically decrease for patients, but there would also be an extremely limited accuracy in medical care.