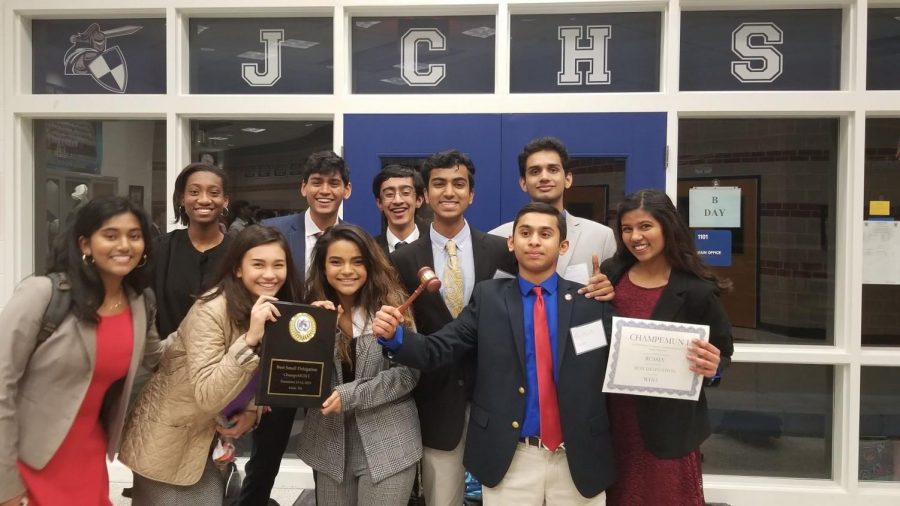 Westfield’s Model United Nations (MUN) club has already been to three conferences this year, and still has more to go. They have visited Chantilly MUN, MUN at Marshall High School, and won best MUN delegation at ChampMUN, which was ChampMUN’s first time holding a MUN conference.

“It was very new for everyone,” confessed Krithik Nadella, 12, “It was generally a smaller conference. The most powerful schools like Thomas Jefferson HS and Langley HS were not there.”

Next, Westfield MUN will be heading to Langley HS, Thomas Jefferson HS, and Academies of Loudoun.

National Model United Nations (NMUN) is a U.S. 501(c)(3) nonprofit organization that advances understanding of the United Nations and contemporary international issues. They go to conferences at other schools and compete acting as United Nations or other similar groups.

Serenity Cripps, 12, one of the officers, noted that MUN is a great opportunity for anyone interested in politics.

Most conferences last two days. Friday evening at six is when the opening ceremony starts, with the first committee session running till nine. Then students go home and come back refreshed the next day for their second session at 8:30 am.

During the conference, the students become real delegates of their assigned countries and participate in committees to try and solve the issues that face people all around the world. There are different types of committees in which the students can choose to participate. There are general assemblies(GAs), which are bigger and address broader issues. Students are either alone or with another delegate, forming a double delegation. There are two topics that the committee is trying to discuss, and the goal is to solve both of them.

There are also crisis committees, where updates constantly come in and the conference evolves based on those updates. “You have to adapt. It’s very on your feet kind of quick thinking,” explains Nadella.

Ad Hoc is another committee, where no information is available beforehand. Nadella confessed that it’s scary to go into the unknown.

However, during ChampMUN, Nadella chose to participate in a specialized committee about climate change.

“We were addressing the issue of the Amazon rainforest along with implementing sustainable green energy throughout the world,” recalls Nadella.

The club has a meeting before each conference, where they can discuss what they are researching and thinking about. Members can also send in their papers to the leadership team to be looked over.

As one of the officers, Nadella has a responsibility of controlling the mock conferences: “We train the new delegates. It’s like a simulation – to get them used to how to debate and give them tips.”

“We are trying to make it more of a cooperative experience and make sure that people don’t feel alone and isolated when they are trying to prepare. Because a lot of people feel overwhelmed, we are trying to do it as a team,” commented Cripps on preparations.

Nadella shares that he also writes a position paper before each conference and that a lot of the solutions that he talks about come from his paper.

There have been some rumors of decreasing membership, but John Baranowski, club sponsor, waves them away: “It decreases every year. You start up with a bunch of people who think, ‘I am going to be involved, I am going to come and do this,’ and then other things get in the way. So, every year we started with about 80 people, and we’re down to 45. And these 45 have been active and have done things. That happens every year. People think they can do more than what they actually can. Or they realize this isn’t what they want and they move on to other things.”

Sadly, it is not possible to join this year, but Baranowski encourages students to check them out at the Bulldog Barbeque in the fall.