THE SUCCESS AND BRIGHT FUTURE OF DEBATE CLUB 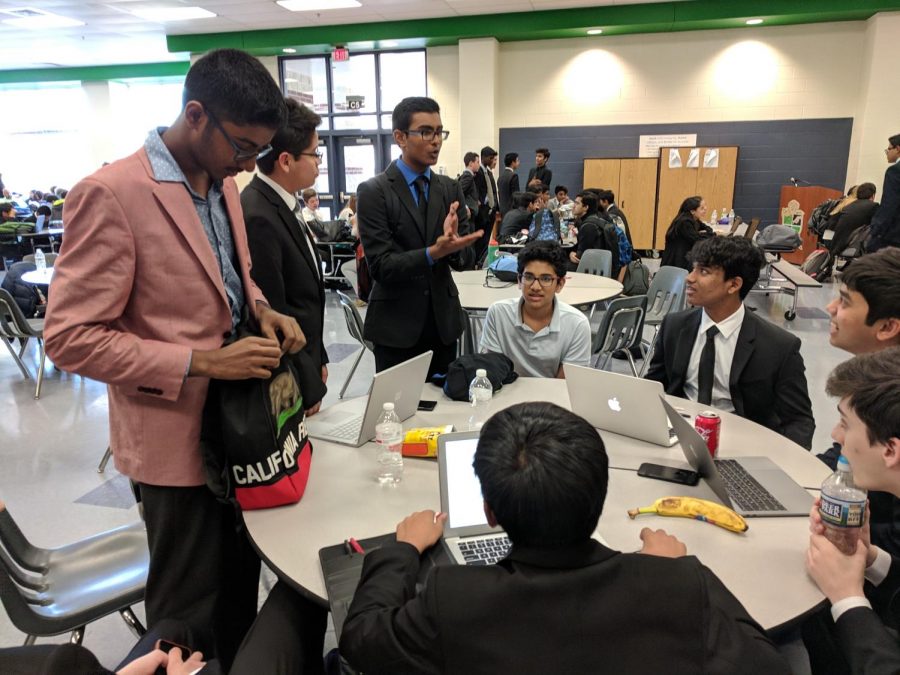 Westfield Debate Club students at a tournament in Woodgrove High School, in 2018.

The competitors arrive bright and early. The first round of debates occur, and the aura of argumentativeness is palpable. A small break between the first and second rounds fails to stop the energy, and the second round blurs past as well. With the first half of debates done, lunch goes out and power rankings come in—the placement of the competitors based on how they did in the first debates. The third and fourth debates fly by too, and before anyone can notice, the competition is over. Awards go out, and everyone returns home tired, yet happy.

Westfield’s Debate Club has been a breakout team, doing very well in local debate competitions. Debate has been flourishing, with 35 members on the main debate team and 10 members on the speech team. While the debate club has been currently run by sponsor Mark Deaton, business teacher, for 2 years, its roots trace back almost 10.

Peter Perez, 12, a member of debate, shared that his favorite parts of Debate were, “competing with other people” and that the “post-round discussions,” the talks between competitors after debate rounds, was his favorite aspect of the club.

He also gave his fondest memory of debate—the time his partner prepared their speech for the wrong side.

“It was hilarious,” Perez laughed, “and we lost it pretty hard, but it was still an enjoyable time.”

Perez, when asked about how it was at a competition, described how it felt: “like stage fright, but there aren’t that many people. It’s anxious and tiring, yet when you’re done you feel very accomplished.”

William Murrel, 12, another Debate Club member stated that his favorite part of debate is “definitely the competitive aspect of it,” and that “going head to head versus other motivated students has definitely improved not only my ability to argue but also my public speaking and confidence before a crowd.”

Murrel also pointed to club sponsor Mr. Deaton, affirming that he “honestly couldn’t have chosen a better sponsor than Mr. Deaton.” Murrel continued, saying “Mr. Deaton’s own experience with high school debate from his childhood as well as his genuine passion for the activity allowed me and other inexperienced debaters to feel as if we had been debating for years.”

Murrel revealed his favorite moment in debate as well, when he won his first tournament. “Coming in I feared that I would be clobbered by debaters with much more experience than I but being able to walk up in front of everyone and collect my first place medal was a priceless feeling. Being able to share the experience with Mr. Deaton whose faith in us never wavered made the feeling of victory it ever more sweet.”

Ankit Roy, 11, also agreed to share his participation in Debate. He also says that the best part of debate is “becoming more confident in yourself and your talking,” asserting that the sentiment is the same “from those who I coach on the team.”

Roy disclosed how a tournament normally goes as well: “Debate rounds themselves can become intense at times. It’s 45 minutes of debating with another team, in which you have to convince a judge why your case is better than the opposition. There are parts of the debate that can be really challenging; for example, as a second speaker, I have to come up with a 4 minute speech off the top of my head, meaning I have none of it written down; I have to do this 4 times per tournament. As you debate more and more, however, the process of debating becomes easier, and it doesn’t feel as stressful.”

Roy praised Mr. Deaton as well, adding that “Mr. Deaton has always been super supportive as a sponsor. Because he’d participated in debate during his time in high school, he’s been able to guide all of us through the process of public forum debating, and his knowledge shines through during his feedback.”

Deaton shared his perspective on the club’s success, pointing the success of the club to “dedicated students that are also excited to compete.”

When asked how the first years of sponsoring have been, Deaton remarked that its been “exciting, as I was a member of debate as well, and it was always a goal of mine to coach a debate team.”

Plus, “the team is doing well, and I like winning,” he laughed.

On how Debate helps students, Deaton asserts that it is “one of the most beneficial extracurriculars,” because it “requires you to think logically… you have to look at both sides, think quickly, express arguments in a concise way—helpful in any career.”

“Speech and Debate is actually two seperate classes, Speech is first semester and Debate is second,” Laub clarified. “Speech is about gaining confidence, talking in front of people, and Debate is more about how to argue respectfully.”

Laub also stated that “if I see a student that is exceptional at it, I point them to the Debate Club.”

Deaton reaffirmed Laub’s view, also saying that “Speech and Debate is about helping students with little skill in speaking, while Debate Club is a competitive event, more for people interested in it at a deeper level.”

The debate team has shown off a spectacular start these last two years, and all signs point to them continuing to crush future competitions.