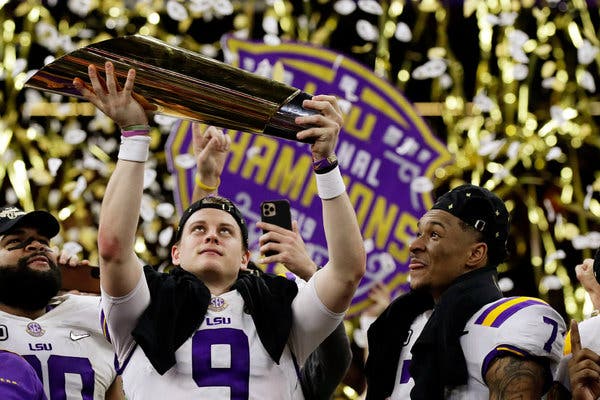 It is January 13th, 2020. The National Championship has just ended. Instead of it being Ohio State or Clemson at the top of the stage, the last team standing turned out to be an opponent critics never thought to come out on top: Louisiana State University (LSU).

“I knew the work the team put in and the type of players we had [could get the team this far],” said Joe Burrow, LSU Quarterback.

Burrow believed that the LSU Tigers were leading contenders, and was a huge force for LSU in this year’s football league. He showed this force in the national championship, putting up staggering numbers; Burrow threw for five touchdowns and had 463 passing yards.

Burrow is an elite football player who truly came from the ground up in the rankings. He started his football career as an Ohio State football recruit, then later transferred to LSU and has become a National Champion. This year, he plans to enter for the draft. He is one of the many football stars that have emerged in the college level today. These football stars are noticed either by their numbers on the stat sheet or the team that they play for.

The teams that get noticed are usually the big names like Oklahoma and Clemson, who were both big contenders for the national championship. Those types of teams are usually the ones that get projected in the league rankings. The league base their rankings solely on the players that play for the teams. That is why Clemson was the favorite for winning it all this year, knowing that star quarterback Trevor Lawrence was coming back.

This year in college football, there were many different stars competing for the national championship, like Lawrence. That being said, the person the person critics believed stood out the most this year is Burrow. He was first in yards and touchdowns for quarterbacks and won the Heisman award because of these accomplishments and many others.

“Joe Burrow is a lot better than Trevor Lawrence. [Burrow] is a senior and Lawrence is only 20 years old,” said Sam Acharya, 12.

Many sports analysts and critics believed quarterbacks in the league couldn’t compare to him but Lawrence, who is a defending champion, was considered to be a big contender for the Championship as well. From the start of the season, LSU didn’t seem like they were able compete, but they continued to prove themselves throughout the season, defeating talented teams every game. They even defeated the Oklahoma Sooners, who are a big name team. That game was not even close, LSU coming out on top 63-28.

Fans enjoyed watching Clemson go up against big name teams and have huge battles until the very last whistle, but despite their great talent, many fans saw that LSU had the better chance of becoming champions. No one in the league could have matched the grit in their team this year. Ed Orgeron, the head coach for the Tigers was believed to be a huge impact to the players and coaching staff as well, leading them to a huge undefeated run all the way up to the national trophy.

During the National Championship, it can be seen that both teams were putting in maximum effort. For most of the game, defense is what kept the game alive for Clemson. Lawrence could not really get anything going and star receiver Justyn Ross was getting shut down by the Tigers’ well rounded defence.

The second quarter is where the Tigers really showed their true strength, scoring 21 points while only letting up 10. They went on to score every quarter, while Clemon’s highest quarter points was the 10 they scored in the second. It was a decent offensive day for Clemson, but their defense could not hold Burrow and the Tigers down the stretch. The lead for LSU seemed to extend almost every quarter and it was not a pretty sight for Clemson.

Burrow and the Tigers went on to take the win 42-25. Even though Clemson is a national favorite for fans, LSU took the doubts of reporters and the people of the college football world and they turned it into fuel for their success.

The motivation gained from the uprise of Joe Burrow and the coaching from Orgeron are two main factors in why the team had been so successful this year. The hopes coming from the achievement are most likely the uprise of a franchise that can bring for memories like this for the fans and school of Louisiana in the near future.