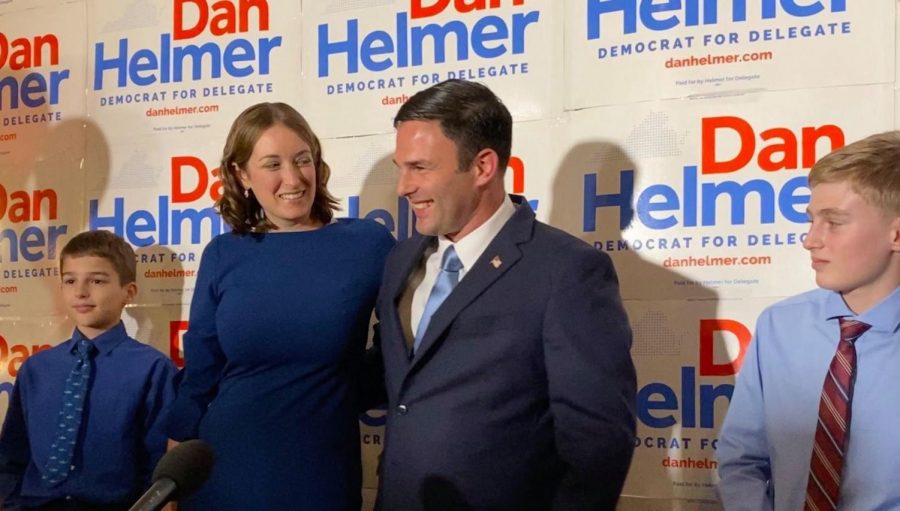 Dan Helmer, with his family, on his campaign for the 2019 midterm elections.

The advantages for Republican Tim Hugo, former District 40 Virginia House Representative, were staggering. He was an incumbent, he had won eight previous elections, and he had raised more money than his opponent. Yet, Democrat Dan Helmer won the position in the 2019 November Elections. This sudden change from Republican to Democrat was encompassing: all throughout Virginia, longstanding Republican offices flipped to Democrat.

In November 2019, Virginia had its bi-yearly state elections. Going into the election, Republicans held a very slight majority in the House, 51-49. All 100 seats were up for re-election.

Out of the 5.6 million voting-eligible population, those who are over 18 and are registered, only 2.4 million, or 42%, actually came out to vote on Election Day. This is far better than typical local election turnout, however, which usually averages 36.7% of eligible voters.

The Democrats won a majority in this election, taking six new seats, resulting in a 55-45 ratio for Democrats. Similarly, or the Virginia Senate, all 40 seats were also up for re-election. Democrats won 21 seats, with Republicans winning 19, another Democrat majority.

This loss has not gone unnoticed by Republicans. Many of them blame the defeat on waning suburban support.

Party strategist Alex Conant, speaking to USNews, said that “Republican support in the suburbs has basically collapsed,” and that the party will have to “find a way to regain support for next year.”

Rural areas, however, remained consistent, continuing to vote for Republicans.

Another possible factor was the U.S. District Court for the Eastern District of Virginia ruling against a redistricting map proposed by incumbent Republicans, claiming that it was gerrymandered. The map that was proposed after the ruling was projected to favor Democrats in certain districts.

The Fairfax County Public Schools Board also had elections this year, with 12 seats up for re-election. While candidates are independant, Democrats and Republicans can back candidates that they feel align with their party. All 12 candidates elected were supported by Democrats, staying consistent with other elections this cycle. The remaining Republican-backed candidates on the board, Elizabeth Schultz and Thomas Wilson, lost their positions. Wilson was the representative for Sully District, the district Westfield is located in.

Schultz, former representative for Springfield District, speaking to the Washington Post, claimed that Democrats are merely “pushing a social agenda,” and that she was “sad that Fairfax County residents… are not paying attention to the local issues.”

Laura Cohen, the Democrat-backed candidate who beat out Schultz, points instead to guns as the reason for why she was elected, claiming that “voters are universally sending a message [that] guns are not the answer to the violence we’re seeing.”

Some of the biggest concerns this election cycle were guns and healthcare. Virginia Democrats received hundreds of thousands of dollars from former New York governor Michael Bloomberg, in hopes that they would enact gun-control legislation when elected. Gun-control donations surpassed those of the NRA this election cycle, demonstrating increased support.

Healthcare has also been a national issue for a long time, and as such, both Democrats and Republicans sought to gain votes by promising to change or improve healthcare systems.

Westfield AP US Government students also participated in this election cycle through their Election Project, where students had to volunteer 10 hours for a candidate or write about local elections.

Carrington Nunley, 12, who volunteered, shared her perspective on the election, claiming that future elections will “flip Virginia from Republican to Democrat,” and that while “they won’t affect the presidential election that much,” they will “impact Congress a lot more.”

Nick Sontra, 12, who wrote about the elections, was happy for the “good variety of Democrat candidates,” but was “disappointed by the lack of Republicans.” Sontra also states that the elections will “change Virginia from mixed to Democrat,” but also says that they are “just a reflection of current Democrat leanings.” For Presidential elections, Sontra affirms Virginia “will go from swing state to blue state.”

Christopher Barrett, 12, who volunteered, thought that the candidates were “strong on both sides,” but was annoyed that Republicans were “playing incumbent” while Democrats were “putting out policy.” Barrett also thinks that Virginia is “rapidly going from swing state to blue state.” He believes that “Virginia still has a lot of independants,” so for Presidential elections, “Republicans will try to campaign more in Virginia, to try and push it back to the middle.

President Trump could have also had an impact on this election. His ever-lowering approval ratings may be linked to the deteriorating Republican support.

David Mark, writing for NBC news, asserts that “partisan voting habits… are now setting the tone” for local elections, and that Trump being one of the “most polarizing president in modern times” has made elections more about politics than local issues.

Virginia was not the only state with local elections this year. Many other states also saw Democrats taking more offices, and typically Republican states were blindsided by the sudden Democrat support, as seen in Kentucky with a too-close-to-call governor election.

With Democrats now having majority control of the House, the Senate, and the governorship, the only question is what Democrats plan to do next. Legislation such as the Equality Act, passed in May 2019, increases protections for LGBT individuals. Virginia Democrats were fully in support of the bill. If the Equality Act is anything to go by, more progressive legislature will most likely be passed after Democrats actually take office.