ACTOR OF THE ISSUE: ALAN GUTIERREZ 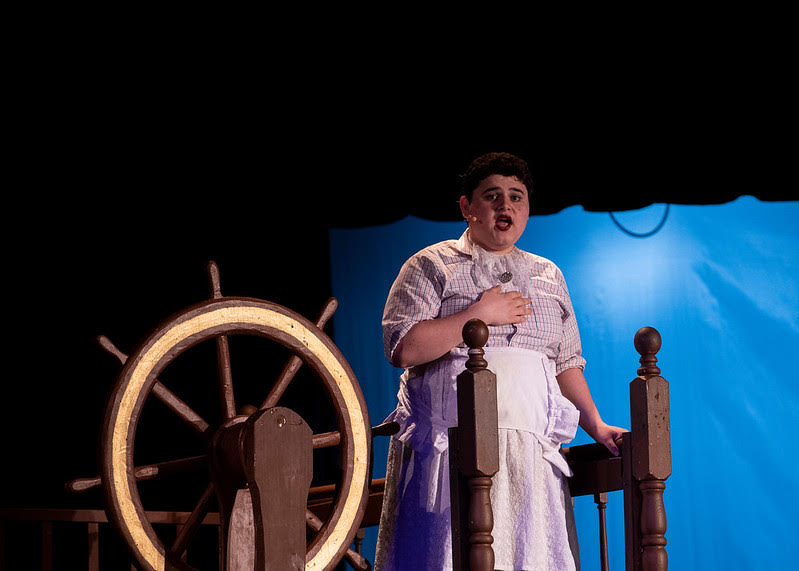 Alan Guiterrez starring as Betty Bumbrake in Peter and The Starcatcher, singing a lullaby perched next to a ship's wheel.

On the Westfield stage, Alan Guiterrez has strutted about in high heels, delivered business propositions in a flamboyant azure suit, and proudly waved a pair of red bloomers—all while belting out musical numbers and following closely with the dance choreography. Part of being an actor is selling your role, telling a story in a character’s shoes. Guiterrez has done a lot of acting in his lifetime, and it’s right about time to introduce his story to the likes of Westfield High School.

Alan Guiterrez, 12, is an actor and costume designer. He has freckles, curly hair, a boyish smile, and a joyful attitude, but most recognizable is his fervent love for theatre.  His origin story—his metaphorical musical debut—may serve as an explanation for his affection for the arts. According to Alan, rumor has it he was born at a party, his mother having gone into labor while dancing to La Viva Es Un Carnaval by Celia Cruz.

“I guess I was born dancing,” Guiterrez reflects.

This was 18 years ago, and his joy for performing is still flourishing. He was born and grew up in America but moved back to Coahuila, Mexico, when he was four years old. He attended preschool there and learned Spanish, which he still speaks at home.

His family consists of six members—himself, his parents, and Guiterrez’s three siblings, all of whom are affiliated with Westfield High School. His older sister has graduated, his younger brother is currently a freshman, and his younger sister attends the Advanced Academics Program (AAP) at Rocky Run Middle School. Guiterrez describes his family as being very close, and their appreciation for each other knows no bounds. Alan hopes after he graduated high school that he will get a Bachelor’s degree in Fine Arts (BFA) at a conservatory, which is a special kind of university reserved for studies in music and the arts.

Alan’s first theatre production participated was a kindergarten play called “Little Red Hen.” Since then, Guiterrez has performed numerous other roles, a handful of which were supporting characters. He played the drag queen Angel in Rent, performed as Piangi in The Phantom of The Opera, and acted as Betty Bumbrake in Peter and the Starcatcher. In addition to acting and singing, he is involved in many other branches of theatre, most prevalently costume design.

Alan’s many roles have given him unique perspectives on life. For instance, his role as Angel in Rent taught him the realities that come with being a woman. His role as Angel required him to dress like a female. His outfit included a pair of high heels, which elicited this reflection:

“My feet were killing me, there was hair in my mouth, my makeup got sticky after a while; being a woman is really hard,” said Guiterrez. “I have more respect for women now knowing that they have to go through that every day.”

In addition, his cross-dressing role brought about some disrespectful remarks from audience members.

When asked about his response, Guiterrez simply replied, “I just ignore them.”

In addition to acting, Alan has served as head of costumes in Westfield Theatre, designing and making the attire for Peter and the Starcatcher and other shows.

“I probably went into costume design because I am inspired easily,” explained Alan. “I could watch an ice skating movie and suddenly want to be an ice skater.” It was not a movie that inspired Alan, rather his older sister whom he watched sew textiles into clothes in his younger years, prompting him to follow in her footsteps.

Recently, he placed second for a Virginia Theatre Association (VTA) Contest in Costume Design. His other awards include two Cappies for Best Actor. The Cappies is a mostly student-run program that gives awards to students who excel in the field of theatre. Rock of Ages won 24 nominations, including Best Show. Westfield’s previous record was 20, for Joseph and the Amazing Technicolor Dreamcoat of 2003.

“I don’t like to think of Cappies as a competition, because art is subjective,” said Guiterrez, “There is no competition aspect, and we’re not trying to better anybody else besides ourselves.”